I've been using tabbed browsers (particularly Avant Browser which I like a lot, and Firefox) for a couple of years now, and rarely use Internet Explorere 6 (IE6) at all these days.

The way I work tends to be pretty intensive. For example, I get quite a few daily newsletters coming into Eudora (mail client), each newsletters contining from five or ten to twenty or more news item links. I usually click on quite a few of these links in rapid succession, and since I've set Avant Browser to open links in new tabs as a background process this is a great time-saving procedure (rather than have to wait for each link to open in its own sweet time). I can then move from tab to tab conveniently -- often while other tabs are still opening in the background -- and in a very efficient way. Additionally, it's very useful to be able to reposition tabs just by dragging them around (a feature of Avant and Firefox, and thankfully added to IE7 at the Beta 3 stage).

Avant (and Firefox, and others that I use from time to time) allows tabs to occupy multiple rows, so it's not an issue to have ten, twenty, thirty tabs open at once. You couldn't say this about Internet Explorer 7 (IE7) beacause you cannot open multiple rows of tabs therefore in practice are limited to at most maybe ten or so tabs open at once after which IE7 will not open new tabs (a surprisingly poor design from the talented Microsoft IE team).


In many cases, the only effect of having twenty or more tabs open at once is to increase the memory occupied by the browser (and with this many tabs open it can easily amount to 200MB or more of memory, which could be a problem (for people with limited RAM in their machine) but usually isn't. 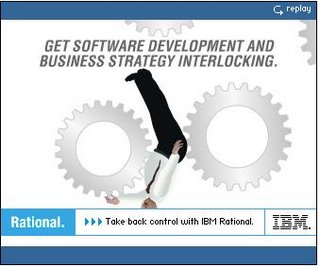 However I have encountered one aspect of having too many tabs open wich definitely can be a "really bad experience" problem, and seems not yet to have been reported on by the Web community at large. It is that if you concurrently open more than a couple of tabs holding Web pages containing dynamic advertisements, then they will consume a large slab of your computer's processor cycles and all of a sudden you find that your system has slowed down dramatically. This is especially true when the Web pages contain multiple such advertisements: two ads per page seem to be in vogue at the moment for many of the commercial sites (and some sites have three or more per page).

Unfortunately, some of the newsletters that I regularly read do have such processor-hogging content. Just one example of such advertisements relates to the campaign currently running for IBM Software, like the one shown opposite where the software development manager (?) is being bounced around against gearwheels -- shades of Charlie Chaplin in the movie Modern Times!

My notebook PC's processor is reasonably fast (for a 2005 vintage system) with an AMD Athlon 64 3200+ model running at 2.0 GHz, nevertheless it only takes three or four tabs containing these advertisements to dramatically worsen overall system responsiveness.

With Internet Explorer 7 due to be automatically installed on hundreds of millions of unsuspecting Windows systems in the not-too-distant future, I expect that millions of users will come to experience thses debilitating system slowdowns once they start opening multiple tabs.

Therefore I strongly advise the designers of all such processor-bound advertisements to redesign them to consume considerably less CPU resource.

There are other Web design considerations for the tabbed browsing environment that I know from bitter experience are being overlooked. For example, one annoying behaviour arises when the Web designer has set a new page to open in the middle of the display area, which is not an issue for non-tabbed browser environments but if you're using a tabbed browser can cause the new page to be centered in the tabbed window and thereby truncated on the right and/or bottom margins.

It will look something like this example (the "Print Page" pop-up from an article in SYS-CON's Java Developers Guide, JDJ) and it occurs for virtually every Web site that generates some form of pop-up window: 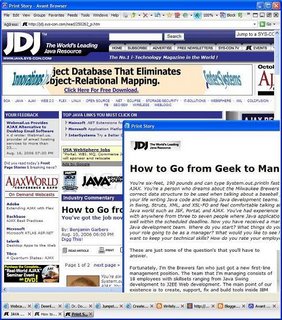 A fairly trivial point, maybe, yet it's another indication that Web designers aren't familiar enough with the behavior of tabbed browsers.

In short, it seems that there's not enough attention being paid to th ebehaviour of tabbed browsers by Web designers, Web architects, advertisers and the like. Things must change when the tsunami of tabbed browser usage caused by IE7 heads our way!
Posted by NotesTracker - Tony Austin at 8/17/2006 02:16:00 PM