I started using Eudora as my mail client way back in 1993 or thereabouts. I still use Eudora to this day; it's not perfect, but has many redeeming features, so why not?

Anyhow, I've just had to rebuild my system and after re-installing Eudora suffered from a somewhat obscure and irksome little problem that I've encountered previously, so thankfully I knew how to overcome it.

For those Eudora users still out there -- I'm sure there are a few -- here's my description of the problem and how to fix it if you ever encounter it. (Since Qualcomm has decommitted Eudora, you mightn't find this solution described anywhere else.) I know that several other "How To" tips that I've blogged about previously have saved the day for other people, so here goes.

The two examples show Eudora's automatic and manual spell checker at work. Nothing unusual here, you just ignore the word, or add it to the dictionary and it should be recognized as a valid word from then on. (Click on any of the images for a larger view.) 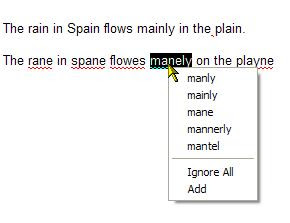 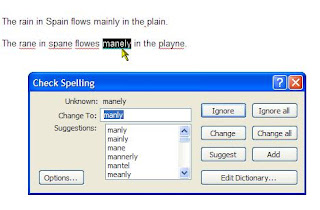 The problem is that next time you come across the supposedly-added word, you find that it's still underlined in red, meaning that for some reason Eudora hasn't remembered it (stored it in the spelling dictionary).

This behavior just about drove me crazy when I first suffered from it some years ago. Eventually, I gave in and had to call Qualcomm technical support, and obviously it was a common occurrence, so the support person was able to tell me the solution without hesitation.

STEP 3 -- You should find that this file has the Read-only attribute, preventing the spell checker from adding new words. (It beats me why you don't get an error message as soon as you attempt to add a word, but that's how it is folks.)

STEP 4 -- Remove the Read-only attribute for this file (by changing the file attribute from "ra" to "a"). The following diagram shows the desired result: 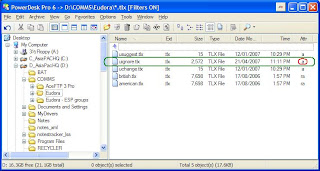 STEP 5 -- Launch Eudora again, and added words should be successfully "remembered" (stored in this file) from now on.

In the absence of Qualcomm support for this excellent but decommitted product, I hope that the above helps a few of you out of a predicament!
Posted by NotesTracker - Tony Austin at 6/21/2008 06:42:00 PM 6 comments: