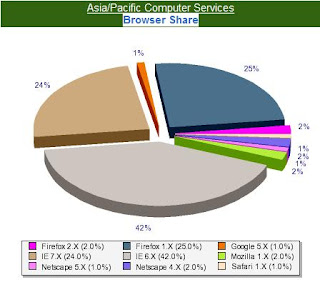 I noticed Firefox share fluctuating, with a drop-off starting roughly in the middle of 2007, building up to a regular 25% to 30% towards the end of 2007. Also that a quite large proportion of Internet Explorer visits are still via the rather long-in-the-tooth IE6 rather than IE7.
Posted by NotesTracker - Tony Austin at 1/30/2008 09:28:00 AM No comments: