Of course, that’s just as absurd a statement as many others that are spouted out in the gun control debate.

Do guns become animate and start firing by themselves? Perhaps sensor-controlled ones would, but fortunately there aren’t many of those around, certainly not in movie theatres and schools, thank goodness. It’s what’s on the other end of the trigger finger that’s responsible, surely?

The above was prompted by reading Data suggest guns do in fact kill people in the online version of The Economist. This article concludes:

“It's really not terribly shocking that making it harder to get your hands on machines designed to kill people results in fewer people being killed. But we've worked very hard over the past few decades to convince ourselves otherwise.”

Go read the article and ponder the arguments for and against gun control.

During the last few days a Windows connectivity problem reared its ugly head. I used to get this from time to time with Windows 7, and now am suffering from it under Windows 8.

Every time that I resume from Sleep mode (which is several times per day) the wired Ethernet adapter would not reconnect and remained permanently offline in “Unidentified network” state, lasting for some minutes at least (I didn’t wait any longer, it should come online in 10 to 20 seconds at most).

While researching the above problem, thanks to trusty old Google search I stumbled  upon what seems to be a solution for a related painful problem that I described some months ago at Windows 8 will not save Network Discovery settings.

In summary, Windows Firewall went awry earlier this year, stopping LAN connections between this system and other Windows systems in my local area network. Since then, I’ve had to keep Windows Firewall turned off, and have experimented with several other firewalls which themselves caused a few problems: firstly being very intrusive (or “noisy”), plus making some other software quite difficult to keep running properly.

Consequently for the last few weeks I’ve been running without a software firewall and being alert for intrusions (as well as some benefit from the Cable modem’s built-in hardware firewall).

My discovery today -- while doing a Google search for Windows 8 repair “Windows Firewall” (this time with searchword “repair” that I hadn’t used on previous occasions) – was an interesting-looking repair tool called reimage that claims to give excellent results. I installed and ran it, and after a couple of minutes of scanning it presented the following results (the final part of the scan results only): 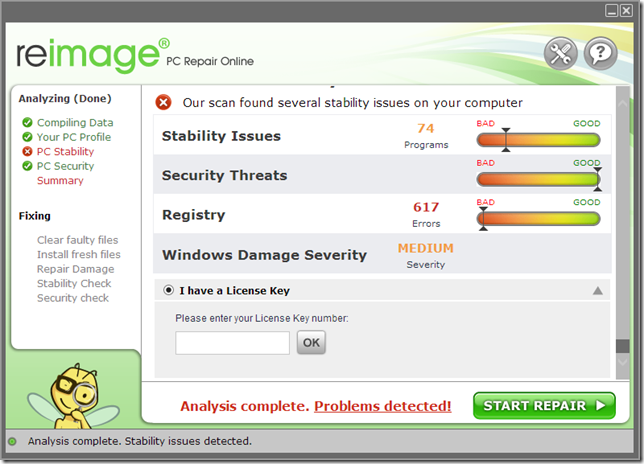 When I clicked on the “START REPAIR” button it opened a browser window inviting me to subscribe:

Being tight for funds at the moment (undergoing some treatment for melanoma, too many decades in the strong Australian sunshine I suppose), I declined payment.

So I went looking for a similar but hopefully FREE repair tool and luckily found one, which I used with good results and so would recommend to you. It’s available from Tweaking.com who describe themselves as “a group of tech heads with system performance on their brains.”

See the overview of their software and specifically (for this discussion) go to Repair Windows Firewall . . .


This will repair the Windows Firewall. The firewall is built into the system rather deep. And when the firewall becomes corrupt it can still block out side connections from coming in. Even when turned off. Also when corrupt you are unable to add any exceptions to the firewall.

Built into Windows “rather deep” is an understatement! As you will see from my earlier post the underpinnings of Windows Firewall are totally obscure. Microsoft themselves don’t provide any readily-accessible documentation for understanding how it’s all supposed to work, and how to systematically go about fixing things when it all goes wrong.

Anyway, even though it’s only described as being “for Windows XP, 2003, Vista, 2008 & 7” I installed and ran Repair Windows Firewall under windows 8. A little over a minute later I got the final screen: 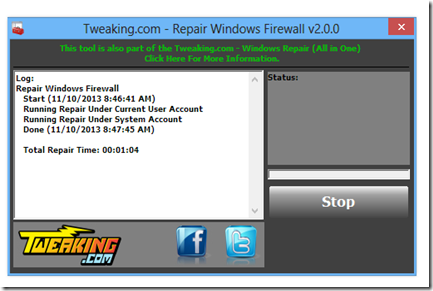 But did it really fix my Network Discovery problem, could I browse other Windows systems on the LAN and could they browse this Windows 8 system?

Some quick testing proved that the answer was Yes, Yes, Yes.

Look again at the second-last last screenshot at Windows 8 will not save Network Discovery settings . . . 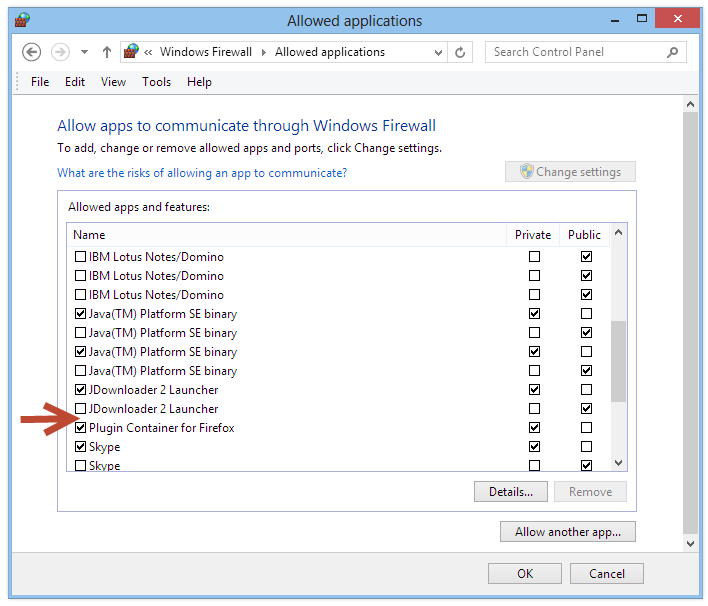 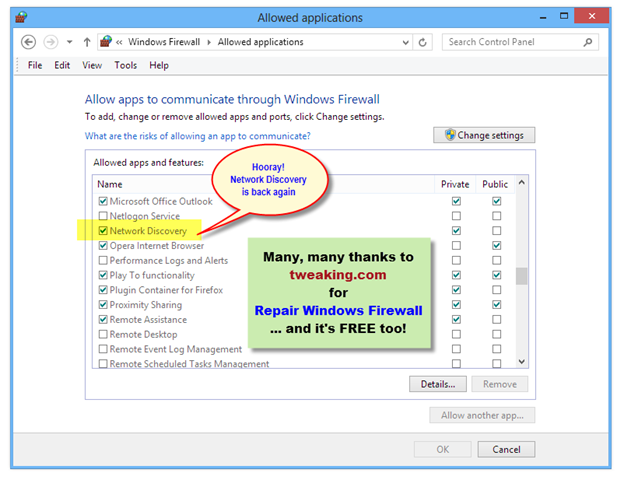 If you decide to try this Repair Windows Firewall tool, of course  it goes without saying (does it not) that you should take an appropriate backup first so that you can recover if Windows somehow gets messed up.

And life goes on for me . . . Now I only have to worry about the recent issue of Ethernet connectivity failure after resuming from Sleep mode.
Posted by NotesTracker - Tony Austin at 10/11/2013 12:13:00 PM 8 comments: