Future crosswords will often have a theme too, including: Microsoft, Sun Microsystems, IBM/Lotus, various computer languages (such as Java, Visual Basic, C#, LotusScript, who knows what else) and all sorts of other technology-related subjects, whatever appeals to me at the time.

Recently I decided to take another look at speech recognition for Windows, after immersing myself in it during the mid-1990s and finding that (a) the software left a lot to be desired in terms of coping with the the oddities and quirks of the English language, and (b) the PC hardware at that time was very inadequate in terms of the processing power required to analyze speech on the fly, thereby leading to unnatural forced pauses during the dictation phase.

It seems that in 2008 the only player left on the field is Nuance Communications Inc's Dragon NaturallySpeaking (version 9.5 being the latest edition, being essential a Vista-compatible update of Version 9.0).

I'm a little over a week into the process of familiarizing myself with NaturallySpeaking (DNS) and am rather impressed by it. I'll have more to say on this in the future, but right now thought that I would log a little issue that I came across, in the spirit that such blog postings help other people who encounter the same variety of issues, for example:
After running NaturallySpeaking for a day or two, I thought that I'd also install another favorite of mine, Universal Translator 2000 (UT2000), a nice multi-language translation tool (which unfortunately seems no longer available for sale) that helps me build phrases and sentences in foreign languages.

After installing UT2000 I discovered that DNS refused to start up, with an error dialog stating that it would not continue because an old version 4.0.4.2128 of the speech.dll file was installed (in the WINDOWS\speech folder) and it needed the latest version 4.0.4.2512 to operate with good stability and performance.

I spent quite a few hours after that diagnosing and trying to solve this problem. It turned out that when installing UT2000 I had also installed a companion product that could be used to pronounce the typed words, and it was this which had overwritten the latest speech.dll with the older version (a perfect example of so-called "DLL hell").

I tried uninstalling UT2000 and reinstalling it without the speech option, to no effect. I even tried Windows XP restore points and even a full repair but these too were help whatsoever.

It was as a last resort that I uninstalled NaturallySpeaking, fearing that I would lose the hours that I had spent training it to recognize my voice (my "user" files). However the team at Nuance had obviously considered this in their design, and the uninstaller offered the option to retain the user files.

Then I reinstalled NaturallySpeaking and after pointing it to my user files it was back to business. That's all there was to it, what a relief!

Why didn't I try this approach right at the start? I dunno, that's the way thing turn out sometimes I guess. But the moral of this story is to be careful in deciding to install several speech products simultaneously, and maybe making a manual Windows system restore point or a manual copy of the WINDOWS\speech folder before each install would be a way of being able to recover. Your comments welcomed...
Posted by NotesTracker - Tony Austin at 7/27/2008 11:12:00 AM 3 comments:

Do you like playing with words and spoken languages? I do, and even have a resources links page on my web site here (or mirror image backup site here).

Last year, I started blogging for Australian technology site iTWire -- see my list of articles at A Meaningful Look at Desktop & Enterprise Computing.

My latest contribution, possibly a world-first (but probably not, even if close to it) is TechWords Interactive Technology Crossword - No. 001 which looks like this: 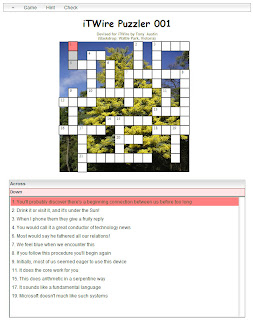 What's a bit different about these crosswords is that their subject matter is largely technology (mostly IT-related subjects). And instead of having to print them to be solved offline, you can interact with the crossword, with the ability to request letter hints and word hints as well as being able to check your entries.

This is the first of a planned series of crosswords. Future editions, at least some of them, will be based around themes such a "Linux" or "Lotus Notes" or "Microsoft" and the like.

As an aside, I now have a very healthy respect for the makers of crosswords! It's much harder to devise meaningful clues than you would think. The cross-matching and interlinking of clues is a very painful process. I wouldn't have even attempted it without purchasing Crossword Forge from Sol Robots (thanks, Cortis Clark).