INSEAD -- who unselfconsciously dub themselves "The Business School for the World" -- release some very interesting publications across a diverse range of topics that I find quite fascinating.

Quite a few of their publications are available for for free viewing and download, including one of the latest:

Vladimir Putin - Evaluating the 'CEO of Russia Inc.' ... Is it sensible to evaluate the leader of a former superpower using many of the same the same criteria one might use for a leading CEO? Manfred Kets de Vries, the Raoul de Vitry d'Avaucourt Clinical Professor in Leadership Development, and Affiliate Professor of Entrepreneurship Stanislav Shekshnia certainly think so. Vladmir Putin, "CEO of Russia Inc.," is in the last of the three-phase "life cycle" described by the authors. But what might all that mean for his country and the world?

It's rather a good read, even for a geek like me. From now on, I'll be looking at leaders in all sorts of organizations and pondering how far they've progressed in their "three phases" and how long they've got left!

I encourage you to read this report. To further whet your appetite, here's the first paragraph of the Introduction:

In studying leaders in the business world—our particular area of expertise—we have foundthat many CEOs, on attaining the position of top leadership, go through a three-stage “lifecycle”: a distinct period of entry, a period of consolidation, and a period of decline. The period of entry is typically characterized by a high degree of uncertainty as the fledgling leaders struggle to understand what their new position entails, deal with the legacy of their predecessors, and search for business themes that will take the organization forward. Once their power is consolidated, the environment in which they operate is understood, and the key themes are identified, the new CEOs concentrate on pursuing these themes to make their mark on the organization. In most instances, it is during this period of consolidation that they reach their highest performance and build a solid foundation for the organization’s future. In the final stage, the period of decline, CEOs begin to lose their interest in doing new things (though they typically retain their interest in preserving their power base!), often becoming myopic, complacent, and stuck in their ways. They may even engage in paranoid thinking, fearful (frequently with good reason) that others are trying to get rid of them. Leaders in this end stage can become real threats to companies they have led successfully for many years. A dramatic example is the first Henry Ford, who rejected all proposed changes to the famous Ford Model T for 20 years, in spite of changing consumer tastes and a shrinking market share. Ken Olsen, the former CEO of Digital Equipment Company (a firm that no longer exists), was likewise out of touch with market reality, a failing that contributed to the decline and fall of his organization.

And then a bit later on:

Putin does not seem to be functioning well in his leadership role—but why? Given his many positive qualities and the favorable timing of his ascendancy, why has he failed to fully fulfill the relatively simple expectations of his shareholders? The answer is simple: he has not done what effective CEOs do.

So, do go read the article: Vladimir Putin - Evaluating the 'CEO of Russia Inc.' ...

The mysterious and pervasive "Rule Number 10"

Jason Mawdsley has written nicely about Coding Conventions: Make Them Agile ... These are simple rules to let your team deliver high-quality code as efficiently as possible.

I reckon that I must be a blue person -- not blue as in "depressed" but just that it's a color that I really like a lot.

But in fact I like just about every color in the spectrum in one way or another. For example, my waveski (surf ski) is bright yellow and red.

I don't hink that I'll like the default appearance of Windows Vista, because it seems to be moving away from the default (blue) Windows XP color theme.

I just stumbled upon Blogthings today, and my first experiment there came up with the following:
You are Ocean Blue

"You're both warm and practical. You're very driven, but you're also very well rounded. You tend to see both sides to every issue, and people consider you a natural diplomat."
(or so it claims) 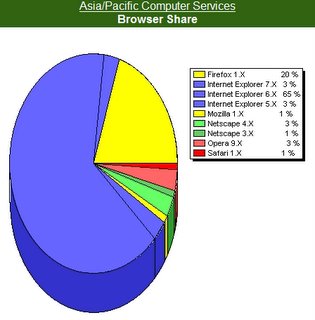 This is the latest in an occasional series. The chart shows visits to asiapac.com.au (in Australia) and its image/backup site notestracker.com (in the USA). ... Fairly typical of visits to many other sites, I'd expect.

Firefox is hanging in there at around 20% (plus or minus 5% from day to day).

Internet Explorer has dropped right back to around 80%. A small percentage of this is for the brave or the crazy (like me) who are running under IE7.
Posted by NotesTracker - Tony Austin at 9/05/2006 07:28:00 PM No comments:

Sorting out the "quick from the dead"

I was tickled by his quite nice demo of several basic sorting algorithms: generic bubble sort, bi-directional bubble sort, and quick sort. They're very nicely demonstrated via a Java applet inside your browser. 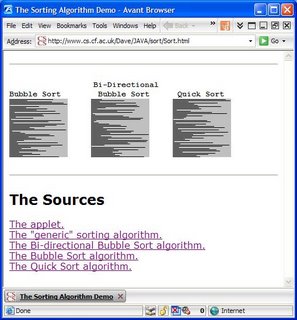 You'll' find his sorting demos at http://www.cs.cf.ac.uk/Dave/JAVA/sort/Sort.html so go there and take a gander!

TIP: for best effect, click on the three charts in rapid succession, going from left to right.


UPDATE - 14 September 2006:
Here's another site showing the above trio of sorting algorithms (and this article points out that the three Java applets were written by the famous James Gosling.) ... http://www.catt.okstate.edu/jones98/algorith1.htm
Posted by NotesTracker - Tony Austin at 9/04/2006 11:42:00 AM No comments:

Variety is the spice of life, as they say. Here's a selection of insightful articles about developing (software) products that are profitable and will keep you in empoyment for years!