TIP: How I got Acronis True Image 2011 to install (a workaround)

I’ve been using Acronis True Image for backing up drives on my Windows desktop system for a number of years. For me, it seems to work more consistently and reliably than other tools I’ve used in the past, such as Norton Ghost.

These backups have saved me on more than one occasion. I really like the way that True Image works.

SO when I found that Acronis True Image Home 2011 had been released, and what's more is available at a big discount and with a free copy of the Plus Pack add-on till 3oth November 2010, I immediately purchased a copy online.

I expected the installation to go flawlessly, as had all my previous installations of True Image, but this didn’t happen at all.

When I launched the installer executable, nothing seemed to happen, no error messages, nothing at all. On closer investigation, I noticed (using Windows Task Manager) that the installer would always terminate in a second or less.

So I jumped on to the Acronis support site, and tried to start up a chat session with a member of the support team. First disappointment was that theis support function was  available only during USA working hours – a BAD POLICY, Acronis, you should realize that you need to support your customers in all time zones and have offer chat feature 24/7 (that’s the reality of the Web, surely you know this).

Anyway, I waited up until after midnight and started up a chat. Without going into boring detail, the support session finally finished up at 3 AM Melbourne time with the support team member claiming that my Windows installer needed fixing/updating (I use 64-bit Windows 7), and asking me to download and run the Windows Installer 3.1 Redistributable (v2) but whn I tried this it “spat the dummy” and didn’t work anyway. I noticed on that page that a newer version (Windows Installer 4.5 Redistributable) was available.

However… being a suspicious type, I strongly suspected that I’d been given a “bum steer” about this supposed Windows installer Redistributable problem, so decided to do some alternative research before messing with Windows redistributables.

I did a Google search and found nobody reporting the same prpblem. A few people had mentioned (with this and earlier version of the True Image installer) that they got some error messages before the installer failed. However, as mentioned above, I didn’t even get a single error message.

In one of those eureka moments, I decided to peek inside the True Image installer executable, guessing that perhaps it was a self-extractor (zipped package) rather than a monolithic executable. And this is where my lucj changed, as per the following image: 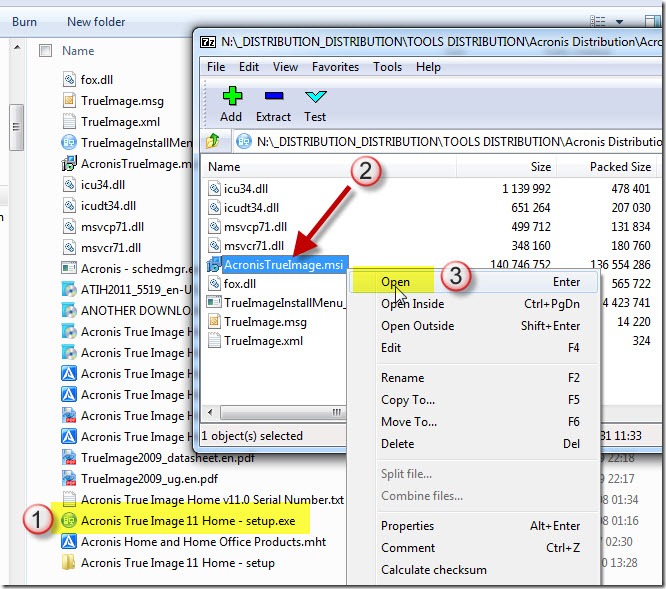 Highlighted in yellow (1) is the True Image installer, and following the red arrow (2) inside 7-zip you’ll see that indeed there was and MSI Windows installer.

With fingers crossed for good luck, I selected the Open option (3) from the right-click context menu -- and much to my relief the installation commenced. After this, everything worked as painlessly as with earlier versions of True Image.

I hope this helps others of you out there. And Acronis, you need to examine this and fix up whatever problem there is with the monolithic installer package for True Image Home 2011  (the exe file).

I just came across the Earth Alerts web site today, and found it fascinating.

...these are the kinds of things our planet dishes out, which arouses human curiosity, fascination and fear.

I had never stumbled upon it before, despite a long-term interest in all things scientific and a web page dedicated in particular to oceanography, surfing, waves, tsunamis, earthquakes and the like -- to which page I have now added a link to Earth Alerts.

If you don’t want to install the above desktop application, then point your web nrowser at the online Google Maps version, which gives eye-opening results like the following: 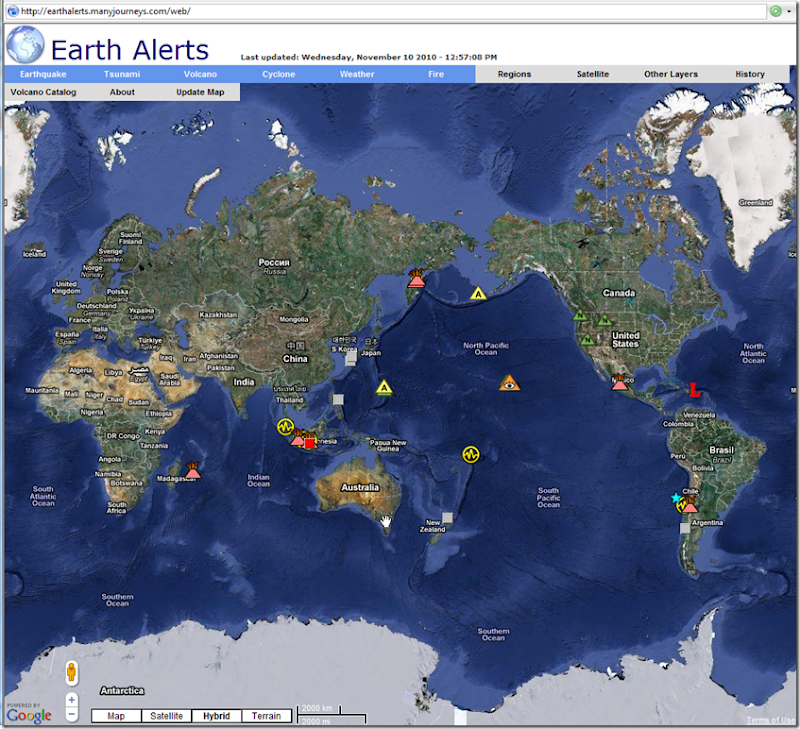 Blimey, this is for a quiet day. Indonesia is suffering from continuing earthquakes and two volcanoes – one of the volcanoes being Anak Krakatau as if that hasn’t caused enormous devastation in the late 19th century (40,000 or more deaths).

There are volcanic eruptions and tremors all over the globe (but for some reason Iceland isn’t showing any activity at this moment, despite the enormous air traffic disruption that it caused earlier this year).

I’m really happy to be located in Melbourne, at the south-east corner of the Australian mainland (where the white hand-shaped icon appears). Australia is geologically a very stable continent, with few earthquakes strong enough to cause injury or damage.

I feel really safe here, except that maybe a Qantas jet engine might fall on me, just as one did on poor Donnie Darko …