How to get Notes/FX working in IBM Lotus Notes 8.x - UPDATED

Here’s an easy way to update your Windows registry so that Notes/FX (field exchange) will work under Lotus Notes 8.

I’ve written previously about how a client of mine who’s long-time user of Lotus Notes was held back from upgrading to Lotus Notes 8.5 (from 6.5) when he discovered that Notes/FX no longer worked. This meant that automatic generation of  Lotus WordPro documents,  used pervasively throughout his Notes apps, could no longer be generated from Notes data.

Refer to my older postings for background on this issue. IBM Support didn’t ever come up with a solution to this bug. Apparently no IBMer could be located who knows about Notes/FX, or was willing to admit it!

Luckily I eventually stumbled upon the solution back in February this year. What I didn’t do then was pass on to you a tip that enables you easily to roll out the fix to across all of your Lotus Notes desktops.

So here’s that simple fix, better late than never!

After this, Notes/FX should start working again under Notes 8, that’s all there is to it.

DISCLAIMER:
The above tip is provided on an “as is” basis. I don’t claim to know all that much about registry files. If you don’t either, it’s probably wise for you to take a look here or here or here or here (or elsewhere) to find out a bit more about using them and the implications of altering the Windows registry.

For some months now I’ve been receiving the Chicago Tribune daily newsletter, out of interest to compare how the goings-on in that windy city compare with what’s happening on the opposite side of the globe here down under in Melbourne, Australia.

The similarities and differences are quite intriguing. Similar problems with public transport, traffic congestion, rates and taxes, parking fees, speed cameras, waste management, and all that sort of thing. (If any one thing stands out, sadly it would be that we don’t have anything like as many shootings here.)

But an article today caught my intention and I’d like to point it out to you for your appreciation. Go read:

Remembering 'Blues Brothers' 30 years later - 30 years ago [on 16 June 1980] 'The Blues Brothers' hit the big screen, crashing their way through Chicago. In the process, they cleared a path between Hollywood and the city.

The story has some fascinating insights, for movie buffs and Chicago citizens alike. 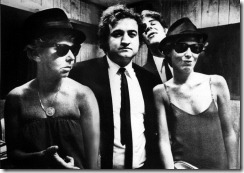 Technorati Tags: Blues Brothers,Chicago,Melbourne,Movies
Posted by NotesTracker - Tony Austin at 6/17/2010 08:20:00 AM No comments:

Enough said! … I do remember reading about Plato during its earlier days in the 1970s (my first decade with IBM), but wasn’t too sure what it all signified -- certainly very novel way back then.