I’ve been tracking the so-called “browser wars” for quite a few years now, based on recording visits to my web site asiapac.com.au and its mirror notestracker.com (since 2002) and blogs (Notes Tone Unturned and others, since early 2005).

I’ve used SiteMeter and StatCounter and Google Analytics to track site visits. But I’m certainly not in ay way obsessive about SEO like some unfortunates, having too much regard for my mental health to get into that game!

I’m still basically a nuts-and-bolts guy, interested in the technology of IT, but recognize the need for web metrics as part of the marketing of my goods and services -- these days, mainly NotesTracker.

Here are some SiteMeter snapshots. Keep in mind that the number of daily visitors is rather modest, so that the visit percentages can fluctuate a fair bit from day to day. However they still seem to be in general agreement with browser statistics described at  sites like Wikipedia or w3schools or Market Share.

Firstly, from late June 2008, we see that Internet Explorer 8 (IE8) not on the scene, nor Google’s Chrome browser either: 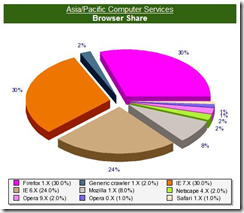 Around September 2008 we find IE8 beginning to show up, in low single-digit percentages: 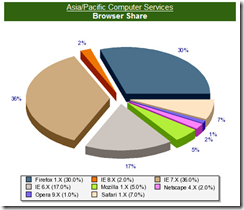 Here’s one from May 2009, during a period where there were lots of visits via links on Planet Lotus (obviously the mix of users being somewhat more technical leading to a higher than usual ratio of Firefox aficionados): 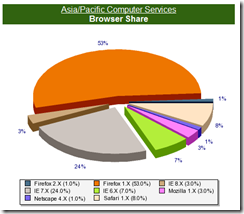 A snapshot from 25 June 2009, pretty much the average browser type distribution. Usage of IE8 is gradually creeping up, but not yet reaching ten percent. All flavors of IE total around fifty percent, whereas in mid-2008 the total for IE was something like sixty to sixty five percent. IE8 plus IE7 plus IE6, No IE5 visits showing up though (yes, there still are some IE5 users out there, but not many). 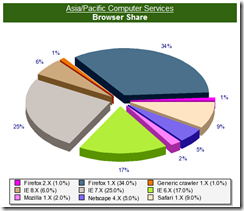 I expect that once Windows 7 is released, the proportion of IE8 users will gradually increase (relative to IE7 and IE6). I’ll keep reporting on the browser battles from time to time.

Since my early days in the IT industry forty years ago, I’ve been a keen evaluator of all sorts of products and technologies. Starting with early versions of Netscape browser, over the years I’ve tried just about every browser variant out there.

I believe in using the best tool for the job in hand, switching between tools as needed. My personal favorites, used daily, are Avant Browser and Firefox, or Enigma Browser specifically for Internet banking (because I find that Enigma best keeps under control the pop-up multiple banking windows, showing them as tabs inside the main instance rather than as external windows).