Firefox 2.0.0.8 can cause add-ons (extensions) to stop working 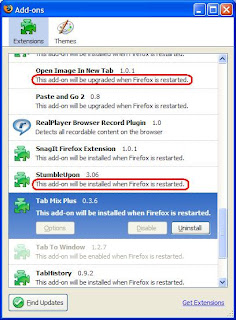 Here's another one of my occasional posts aiming to hopefully reduce other peoples' angst ...

I was happily working away with Firefox version 2.0.0.7 the other day (October 20th), when out of the blue a dialog box popped up informing me that version 2.0.0.8 had been installed and would come into effect next time that I started the browser.

That seemed innocuous enough. I'd seen the update message a number of times before and had no issues with the newly-installed version. But this time, things were different!

When I restarted under version 2.0.0.8 I went looking for tabs at the bottom of the screen -- put there as an option of the nice Tab Mix Plus add-on (extension) -- and was surprised not to find any tabs down there. Then I looked to the top, and this is where the tabs now were to be found (without any directive from me).

Thinking this must have been a minor perturbation, I tried to open the Tab Mix Plus control panel but it was nowhere to be found, nor were any of the controls for various other add-ons that I use. So I opened the add-on manager window, and found that all the add-ons were there but in a strange state, as shown in the first image.

I've started a discussion about it at this posting on ITWire and looking at this page you'll see that some people have no problems with the upgrade while others have the same problem that I encountered. Who knows why, it seems random!

Strangely, the following suggested fix that worked for me doesn't help everybody. You'll find it at mozillaZine under the topic "Corrupt extension files" on the page Unable to install themes or extensions - Firefox

After I restarted Firefox, there immediately appeared a dialog box stating that three add-ons were incompatible with this version, so I followed the advice and disabled/deleted them, after which the add-ons all appeared as with version 2.0.0.7, thank goodness. (It also prompted me to do some housekeeping by uninstalling various add-ons that I've experimented with but rarely if ever use.)

It beats me why the Firefox v2.0.0.8 installer couldn't identify those problematic add-ons and save me all the pain -- but that's life! 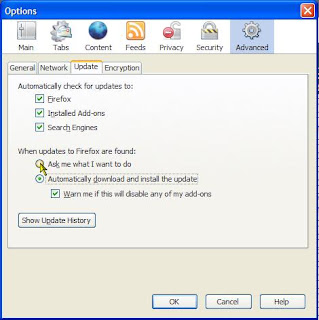