At last I believe in the Theorem of Pythagoras

View a collection of other interesting dynamic GIFs here.

Possibly getting eaten by a shark, versus winning the Lotto?

I keep telling members of my family that buying Lotto tickets is a “mug’s game” and that they would better spend their hard-earned money on something else.

They even think that buying a Lotto ticket each week increases their chance of a win. I’ve given up on trying to persuade them, it’s like talking to the proverbial brick wall.

Earlier today I was reading Response to the latest shark bite is fuelled by myth and retribution and reading the various interesting opinions of commenters.

One of them pointed to a web document that turns out to be a real gem, and I encourage you all to read right through its six pages:

Shark attacks and the Poisson approximation by Byron Schmuland 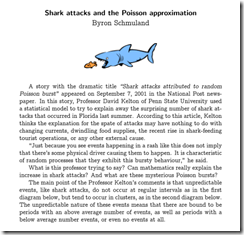 As well as gaining valuable insights about your chances of being gobbled by a “Noah’s Ark” you will also learn about the theory of coincidences: winning the Lotto, having the same birthday as someone else in a group, and the true nature of Edmonton Oiler Wayne Gretsky’s amazing batting average.