Windows 10 build number should be added to System Properties dialog

I’m fed up with some of the patently obvious things that in various incarnations over the years Microsoft has left out of Windows, or have implemented poorly and let us suffer the functional or usability consequences.


Some of the omissions have been major items, while others have been small things, irritations and inconveniences. Indeed there have been entire books, such as Windows 7 Annoyances, devoted to listing Windows deficiencies and where possible providing solutions or workarounds.


One such annoyance, for example, used to be in File Explorer, or Windows Explorer as it was called until fairly recently. When you opened large directories or directories on a low device, you often got the angst-laden message “This folder is empty” when in fact it was perfectly healthy and all the folder’s contents were intact. That message of doom would sit there for a few seconds while you wondered what had gone wrong and how you would get back all of the missing contents.


Thankfully that message was improved recently, with the advent of Windows 10, was it? Thankfully the message now    says “Working on it” and I suspect this simple enhancement has averted many a heart attack.


These days, under the product name Windows 10, we are getting minor u[dates/fixes all the time, with major updates or “builds” being released every year or so. The latest on is the “10 May 2019” update with the build number being 1903 (year plus month, it was originally expected to be released in March 2019). Last year’s u[date was build 1809 (nominally for September  2018).


there’s no simple straightforward way to display the current build number. Users have no one-click, in-your-face option for knowing if their system is still on build 1809 or for confirming that it has been updated automatically to build 1903. 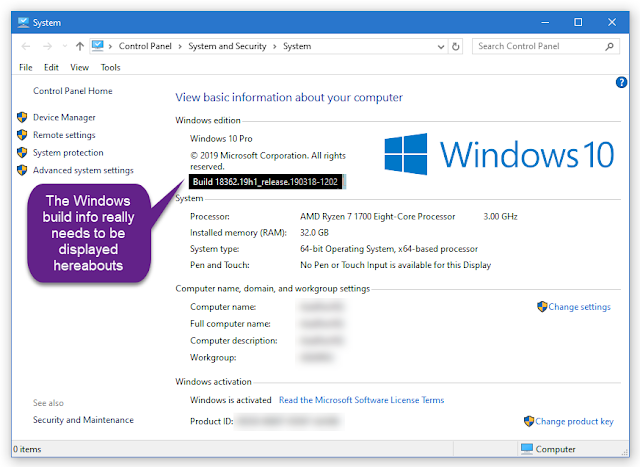 Therefore I’m asking Microsoft to make a simple enhancement to the System properties dialog to include the build number something like in the above screenshot.

Easy to implement, Microsoft, so do it yesterday!