Something strange has happened in the last week or so to the positioning of the Wikipedia icon on my system, whenever a Wikipedia page is viewed using Internet Explorer (IE) or Avant Browser which is a front end to IE that I use all the time instead of IE’s inefficient layout and features.

It’s only happening on my primary desktop system, a Windows 7 Ultimate (64-bit) installation, and not on any of my secondary systems.

I don’t have Opera Browser installed at the moment, else I would have tried that too, but the above should be representative enough of whatever’s happening: mishandling of HTML elements, or goodness knows what.

As I mentioned earlier, this weird behavior only started occurring a week or so ago. I’ve been installing and uninstalling software of all sorts, as I usually do, and running Windows Updates as they become available.

It’s not serious, only puzzling, and I hope it goes away soon (black magic, and all that). Any ideas or suggestions, folks?

Notes 8.5.1 requested Runtime to terminate it in an unusual way – Any ideas? - UPDATED

It’s Saturday afternoon, and I wanted to briefly check something in Lotus Notes, then go off and do other weekend activities.

But immediately after entering my Notes password, I got the following error: "This application has requested the Runtime to terminate it in an unusual way" – just what I needed to enjoy my weekend! 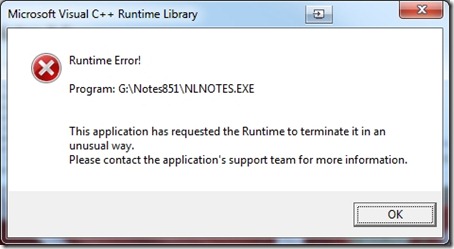 Notes Diagnostics (NSD) didn’t seem to help. I trawled through all the online IBM and non-IBM support knowledgebases and forums that I could find, but didn’t find anything relevant.

Just in case it was a Windows error, I ran Registry Mechanic v9 and let it make some registry corrections, but to no avail as far as this Notes error is concerned.

I’m not sure what to try next, so YOU are my support team! Have any of you come across, and resolved, this error with Notes 8? Do I shave to waste time and effort reinstalling Notes 8.5.1 and the two 8.5.1 fix packs? (And, for that matter, why does the Notes 8 install have to take so darn long, ten minutes or more instead of a couple of minutes? Pity that it’s not a simple unzip-and-run like Eclipse.)

Well, it’s already Saturday evening here in the south-east corner of Australia., and I’m giving up on this until tomorrow at the earliest. (There are some good British TV shows on tonight that should let me slip my brain into neutral and take my mind off such stupid, unwanted software glitches!)

UPDATE (01 May 2010) – PROBLEM RESOLUTION:
Purely by chance, I worked out that the problem was caused by an extension manager add-in for Skytus (which is a free interface between Lotus Notes and Skype).

I had Skytus version 1.1.15 quite happily working with no errors, but for some reason the new version 0.20.0 with it’s MSI installer caused the major disruptions described above, and I’ve sent the details to developer Dmytro Pastovenskyi for resolution.

If you get this horrendous Notes startup  error, you can bypass it by commenting out with a leading semi-colon or deleting the following NOTES.INI line (shown with the semi-colon):

This leads me to think that others reporting the same runtime error message with Lotus Notes might also do well to suspect any such add-ins for a similar cause.

As a techie, I need all the help I can get when it comes to designing things, don’t you too?

Without further ado, I strongly recommend that you skip over to Dan Stockton’s new Design with Intent site and download the version 1.0 draft of his design pattern cards. 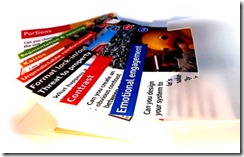 He talks about gambits -- “the 'repertoire of tricks' that experienced designers (and architects) are able to bring to bear on a problem, drawing from chess terminology” -- and patterns, and puts forward eight “lenses” to use as a way of grouping the 101 cards according to different kinds of disciplinary 'worldview' or fields of research:

The original idea was that an architect might approach influencing behaviour by instinctively proposing ideas from the Architectural lens, an ergonomist by using ideas from Errorproofing, and so on. But in fact this is a very loose taxonomy and a number of the cards would fit happily in other lenses. It is more of a convenience grouping than anything rigorous, so please don't take it too seriously. It's the gambits or patterns themselves which are more important.

I find this all very interesting, especially the Machiavellian Lens (right up my alley), which:

… comprises design patterns which, while diverse, all embody an 'end justifies the means' approach of the kind associated with Niccolò Machiavelli. These will often be considered unethical, but nevertheless are commonly used to control and influence consumers through advertising, pricing structures, planned obsolescence, lock-ins and so on, and central to much work by authors such as Vance Packard and Douglas Rushkoff revealing the 'hidden' structures which shape our everyday behaviour.

So go and download the PDF (you can download them all in a single PDF if you prefer), and note that Dan is looking for feedback to help improve his draft. Let me know what you think of the 101 patterns.

I’m slowly catching up with my reading, and just came across Programming for Profit posted right at the start of this month.

Larry O’Brien explains how his cousin Fabien apparently has designed a new programming language that will make him rich by solving many of the problems with existing languages.

The rattlesnake rattles on, be it hot or cold

Further ponderings about climate change and scientific methodology – what does it all mean?
Go visit my Basic Questions weblog:

A digital clock that you’re sure to love!

Here’s a digital clock like none you’ve ever seen before.

See it full size at http://yugop.com/ver3/stuff/03/fla.html

Planet Lotus does strange things to me (why, Yancy?)

Well, not to me personally, but to the mouse-over panel that pops up in the rightmost Planet Lotus column.

I really like Planet Lotus, it’s an enormously valuable asset for the Lotus community!

The yellow/green/blue highlights demonstrate the sort of HTML code snippets that always appear in the pop-ups for my Planet Lotus entries (but not, as far as I can ascertain, for anybody else’s).

In this particular case, we see HTML elements such as “p” and “br” and “title” and also “hrefhttps:www.makuseof.com” coalesced with “tag”

Even when the pop-up contains plain text, the very first character in the popup panel (on the line just underneath my name) is always an extraneous letter or special character of some sort.

As background info, my blogging host is Google’s Blogger.com (which should be kosher).

On the creation/submission side, I nearly always use Microsoft’s Windows Live Writer to compose the posts offline (a much faster/easier way to create and update posts than using the Blogger.com online native editor).

So my question for Yancy Lent (or anybody else supporting Planet Lotus) is: Why are not such HTML elements correctly stripped out from my entries?

We landed momentarily, upon a premise … Cloud computing? Phooey!

Divided by a common language, we are, we are! US English, Australian English, British English (not to mention New Zealand, Irish, Scottish, South African and other variants).

This rant is not about “cloud computing” -- but if you want a quite good overview of this rather nebulous topic (pun intended) you could do worse than reading Cloud Computing— Latest Buzzword or a Glimpse of the Future? over at the Google Apps site.

Using Wikipedia a a reference base, premises are land and buildings together considered as a property, while in logic a premise is a declarative sentence, or proposition (which would go along with another declarative sentence known as the conclusion). If you don’t quite follow this, see Dictionary.com or other definitive sources. To quote from Wikipedia regarding premises:

And regarding premise, consider the statement: “Since all men are mortal and Socrates is a man, it follows that Socrates is mortal.“

In this example, the first two independent clauses preceding the comma (namely, "all men are mortal" and "Socrates is a man") are the premises, while "Socrates is mortal" is the conclusion.

So, you might implement a cloud computing solution based on the two premises that it would firstly save you money and secondly be faster to implement than an on-premises, or in-premises, solution (one located on your organization’s data center, for example). But it would be incorrect to say “on-premise, or in-premise” solution.

A pedant I am, I am for sure! Having done lots of computer programming during more than four decades, the precise use of language (machine language, that is) has become even more ingrained in me. I will leave “no stone unturned” in my puritanical quest for verbal accuracy!

I get irked when terms are used incorrectly. Our verbal communications, whether spoken or written, deserve to be carried out with care and accuracy – preciseness, as well as precision.

All the same, I’m quite prepared to be flexible and pragmatic about it. All spoken languages gradually morph, new words are getting introduced all the time, others drop out of use.

Variations in grammar, spelling and pronunciation develop between regions/countries. As the song goes: “You say pyjamas and I say pajamas.”

Such differences can variously be confusing, amusing, embarrassing or even alarming. For example, in an early visit to the USA I was perplexed when the airline cabin staff said that we’d be landing momentarily, which to me (as an Aussie) meant “for a moment” so I had visions of a touch-and-go landing about to occur, not much time to alight (or “deplane” – ugly word):

To digress:
US airlines can do things surprisingly fast, at times. During one  business trip when I was at the IBM Lab in Rochester, Minnesota (helping prepare the way for the IBM AS/400 system to be readied for announcement in 1988), I had cause to fly from Rochester to Atlanta, transiting via O'Hare airport Chicago.  The late evening flight into O’Hare was delayed almost an hour due to fog, it landed, I ran at top speed between the two airport gates, but barely missed the outgoing flight to Atlanta. Amazingly, the luggage had already been transferred between aircraft, no more flights to Atlanta that evening, so I had to sleep overnight in my street clothes! That, I suppose, is an example of speedy service that turns out to be bad service.

Getting back to spoken languages, English specifically, here are just a few a few examples of regional/national differences:

Oh what fun and games can be had with words.

Now I know where my grandson went!


I was looking at 10 Ways How Photoshop Changed The History Of Photography and this image caught my eye:

Due to the twisted way that my mind works, I decided to give it the caption: “Now I know where my grandson went!”

How twisted is YOUR mind? Can you think of a more apt caption?