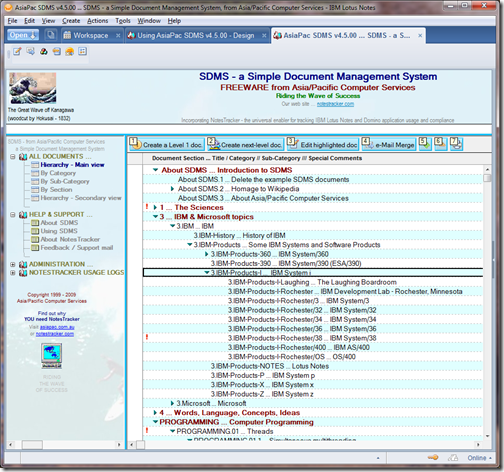 SDMS incorporates our NotesTracker capability, which enables comprehensive tracking of database activities for usage details (document creates, reads, updates, deletes, pastes, mail-ins, view or database opens, etc) and for monitoring database compliance (who did what, when, and where).

See our home page asiapac.com.au or notestracker.com for the download link to the current production version 4.5.00 of SDMS.

The e-mail merge feature was enhanced, as requested by a user of SDMS, now allowing any of the user's mail views and folders to be selected as the source of mail messages to be merged:

Previously, just the Inbox was available for selecting memos. This view shows a merged mail memo: 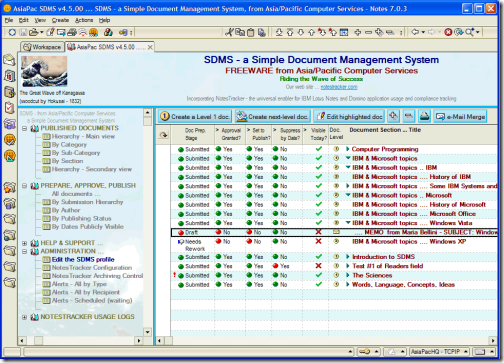 Also added was an agent to import SDMS documents from a different SDMS database into the current one (very useful, for example, when upgrading to a newer SDMS version).

You can better tailor the SDMS page header area, by specifying your own database logo image together with your website URL or your e-mail contact address.

Web browser header, showing that (if you like) for the Web environment you can set up a different user-specified logo and logo description:

And as you might expect, there are various usability improvements. Plus some bug fixes, of course!

For application support and development compatibility testing, I run up to four or five different versions of Lotus Notes on my system, at times several them concurrently in virtual machines. This can get a bit confusing at times: it’s quite easy to find yourself working in the wrong Notes version’s window.

For as long as I can remember, I’ve been taking advantage of one of the NOTES.INI settings that enables you to modify the window title and display whatever text you desire – refer to the Window_Title setting at IBM developerWorks.

For version 7.0.3 (running in the virtualized Windows XP Mode of Windows 7 Ultimate), I have: 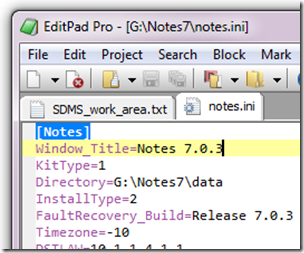 For no particular reason, until today I hadn’t gotten around to trying this with Notes 8, and for the Release 8.5.1 managed beta refresh I set up the Standard (eclipse-based) Notes Client’s NOTES.INI file like this: 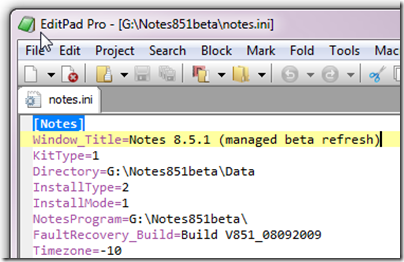 However, the modified window title text did NOT appear in the title bar: 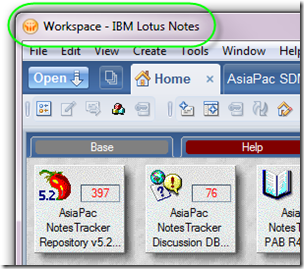 Why not? In my dotage did I miss something obvious here, or doesn't this work (at least, for release 8.5.1)?

I’ve blogged several times about how to install multiple versions of Lotus Notes and Domino (releases 4, 5, 6, 7, and 8) on a single system.

The most recent article was Coexistence of Notes 7 and Notes 8 on the same system. The following comes as a consequence of one reader contacting me to see if I could provide assistance with a problem that he has encountered.

Below is Marek’s outline of his problem, which I’ve taken the liberty to paraphrase slightly since he’s based in Europe and English is not his first language:

We are using in our company dual Notes, but not 2 installations of different notes but it is created with a VBS script a particular copy of the original installation. So we are running on 2 notes clients which are connected to 2 different servers with different databases.

I am working now on a VBS script, and am having problems with connecting to the right Notes session.

If I use Set Session = CreateObject("Notes.NotesSession")
it connects to the session of the first-started Notes client.

The problem is if somebody starts the wrong Notes client as the first the script just breaks down with an error message like “database not found”.

I was already thinking about how to identify the [appropriate] session and then switch it. Am able to identify the session (every session has his own INI where is stated the server and other login details) but I’m unable to switch the sessions.

The second idea was to register the nlsxbe.dll but both Notes clients are using the same nlsxbe.dll so this does not help.

I would really appreciate if somebody could help or come up with some good ideas and help move me forward.

Now, if you read my blog posts, it’s apparent that Marek is attempting something completely different from simply installing multiple Notes clients on a single system. His problem is a design/coding issue, not an installation/configuration issue as such (although I suppose that some configuration option or other just might have some effect on what’s he’s trying to accomplish).

Marek’s working in an area of Notes programming to which I’ve been little exposed, therefore I’m going to “pass the buck” over to the wider Notes development community. Do any of you have experience in this area (interfacing with VBS scripts) and are you able to give Marek any tips that will help him to achieve his objectives?

If you can help in any way, please reply to this post and/or contact me (for example via the home page of Asia/Pacific Computer Services, asiapac.com.au or notestracker.com) so that I can pass on to you Marek’s contact details, which I’m loath to include here in case the spammers get his e-mail address. We’re looking forward to hearing from you!

Back in February 2009 I blogged about Coexistence of Notes 7 and Notes 8 on the same system.

In previous years, I had written about how to install multiple versions of Lotus Notes and Domino (releases 4, 5, 6, 7, and 8) on a single system, but from now on I’m going to stop bothering with releases earlier than Notes 7.

Specifically, at the moment I’m focussing on Notes/Domino 7.0.3 and Notes/Domino 8.5.1 -- I’ve been running the managed beta of 8.5.1 for a while, and liking it a lot. My main concern is that apps that I develop or modify under release 8.5.1 should be as compatible as possible with release 7.x, and thus most likely with release 6.x, which should cover the great bulk of Notes users.

Around two months ago, I experienced a motherboard failure, and my local hardware expert gave me the bad news that while it was still under warranty I’d be without it for at least a couple of weeks while it got repaired. So I reluctantly agreed to buy a new motherboard as a rapid solution, but being newer it obstinately refused to recognize the fifth hard disk drive under Windows XP (which had no problems recognizing it). Sadly for me, I was informed that I needed to upgrade to “a more modern operating system” ... I had a strategy of staying with Windows XP for a couple of years more, but (needing to remain compatible with what my clients were using) it could only ne Windows Vista, which I dislike – or, he suggested, why not skip Vista and go to Windows 7 (which was close to being finished now)?

So now I’m using Windows 7, the “gold” or RTM version. What’s more, it’s the 64-bit version, so that at last I can use more than 4 GB of RAM to support running lots of concurrent tasks, such as multiple VMs with various versions of Lotus Notes/Domino, and other such nerd’s dreams.

Indeed, in one of those earlier posts, I already recommended running side-by-side VMs as being the cleanest way to support multiple Notes/Domino releases on a single machine. Here I say “cleanest” because each virtual machine has its own Windows registry settings intact.)

I have a mere 8 GB of RAM installed (four 2 GB cards) because 4 GB cards were unobtainable at the that time, even though I aspired to having 16 GB, but 64-bit Windows 7 seems to manage RAM fairly well and for the moment 8 GB seems adequate.

I also took the opportunity change from a dual-core to a quad-core processor, so as to run more concurrent processes (managed by the very nice Process Lasso, highly recommended for the serious nerd). And now that I’ve gotten the repaired motherboard back, I’ve used it to set up a second system and have commenced a regimen of system-to-system dynamic backup (with around 6 terabytes of hard disk available), not really much more expensive than purchasing one of those relatively a “dumb” dedicated external storage devices.

Blimey, when I started at IBM way back in 1970, not even mainframes had anything like this much power, and even if they had existed they would have been unaffordable for an individual (millions of dollars)!

I chose to install Windows 7 Ultimate (64-bit) edition, and because I made sure that I got a new processor that incorporated with the requisite hardware virtualization  support -- see the Windows Virtual PC website. It explains that “Windows Virtual PC requires a CPU with the Intel® Virtualization Technology or AMD-V™ feature turned on.”

I do find that Windows XP Mode is quite seamlessly integrated with the Windows 7 host, I have found it to operate more closely like a stand-alone Windows XP machine than virtualised clients that I had  used previously, such as Lotus Notes Client running inside Microsoft Virtual PC 2007 or Sun VirtualBox. 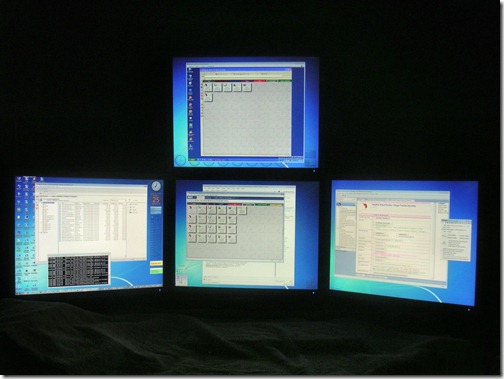 On the top center monitor we see Windows XP Mode (which is a  license, included with both Windows 7 Professional and Ultimate versions, for Windows XP Professional with Service Pack 3 running under  Windows 7 Virtual PC), and open inside it is the Lotus Notes 7.0.3 workspace.

Bottom left is the Domino 8.5.1 Administrator managed beta client,  with the Domino Server 8.5.1 (64-bit) console overlapping it in front.

Bottom center shows the workspace for the Lotus Notes Client 8.5.1 managed beta (with Windows Live Writer underlying it, Microsoft’s  excellent  Microsoft desktop productivity tool that I’m using to write this and all my other blog articles).

Bottom right is the Lotus Domino Designer 8.5.1 managed beta, which offers a major opportunity for designing and developing some amazing new Lotus Notes and Domino applications.

I really do need two more monitors, don’t I, so that I can run even more things at once!

UPDATE – 23 JANUARY 2010:
In response to a question just posed by Alberto about coexistence of a Windows 7 32-bit workstation with his 7.0.3 Domino Server – and possible problems such as replication errors. Here are images showing the on-disk structures (ODS0 for pre-Release 8 and Release 8 Notes databases: