You must learn something new each and every day of your life, so I keep reminding my young grandsons. It’s a maxim that I still follow myself, in a desperate bid to keep my brain alert and defer that day when my grey matter finally degenerates into a useless pile of wobbly jelly.

As an example, this morning for the first time I came across the legal term “informed consent” which is explained thus at Wikipedia:

“An informed consent can be said to have been given based upon a clear appreciation and understanding of the facts, implications, and future consequences of an action. In order to give informed consent, the individual concerned must have adequate reasoning faculties and be in possession of all relevant facts at the time consent is given.”

I was led to this learning opportunity by David Platt’s MSDN Magazine Blog post The Myth of Informed Consent (go read it yourself before continuing here). He finishes with:

“We developers are the experts, and users depend on us. We cannot abdicate our responsibility by asking for guidance from someone who cannot possibly know. Informed consent in computing is a myth, and companies that claim it as an excuse for their malpractice are weasels. Stop it. Now.”

David was commenting on the a dialog box generated by Norton Internet Security which leaves the hapless computer user to work out and decide on the significance of the meaning of an obscure message. Actually, I’d go even further and call the message is obscurantist (rather than just obscure), leaving the user most likely to have to guess what to do, rather than coming to a reasoned conclusion.

Software tends to be rather difficult to design, develop and test, and in my experience the people involved typically focus on the the technical architecture/design/coding accuracy rather than the textual precision and accuracy.

Usability testers should always be involved, and if worth their salt they should pick up on wordings and meanings that are obscure, incomplete, misleading, indeterminate, and so on. I wonder how much software gets released without any significant degree of usability testing.

Sensible and accurate wordsmithing takes time and effort, hence adds cost (which is doubtless the reason why it’s often not done). Further, not all people are good at writing clearly and concisely – not to mention spelling properly, as well as using accurate terms and terminology.

As an aside, my pet peeve at the moment is the schoolboy howler error of referring to a single building as a “premise” when discussing broadband (such as Australia’s National Broadband Network), using terms such as cabling is laid right up to the premise and  in-premise terminating equipment. However it wasn’t my intention here to focus on poor writing, spelling mistakes, bad grammar, and the like, bad practice as they are.

David Platt’s security warning dialog box is just one example of the sort of rubbish that software designers and developers keep forcing upon us.

You’ve surely got your own examples. Below, without further commentary, are a few others: inane, puzzling and meaningless gibberish from software vendors big and small,  that I’ve collected over the years …

Mr. Software Vendor, I do happen to run more than one application at a time,
not just the one YOU developed, whichever it is of all that are currently active!
And I have multiple hard drives.

At least I know that the problem’s occurring with Eudora,
but that’s about all I know.

Thanks for telling me, so what?

I knew this was associated with Acronis True Image. but what should I reply?
[It took some time to discover which of the drives was “hard disk 7’ and
I wonder why they don’t make it easy by quoting the drive letter instead]

I do really like Lotus Notes, but all the same …

Techsmith does it too (not just IBM Lotus Software) …

… about as useful as the following: 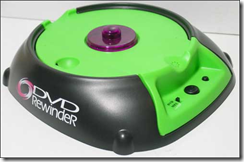 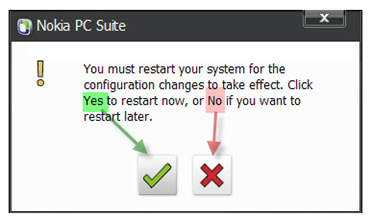 Does the right hand know what the left hand is doing? 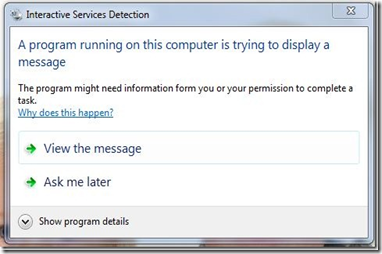 UPDATE: here’s one that I got just a say or two after posting this story… 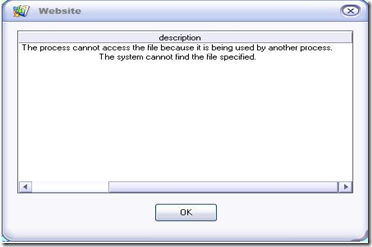 The above are laughable, but for God’s sake:

Stan Cross (in Smith’s Weekly, 1933, Australia).
One of my favorite illustrations of all time!

Walking briskly for health management (and exercise for avoiding cancer)

You might be interested in a couple of entries that I’ve just added to the Sciences, Medicine & Health page of my website, at notestracker.com and its backup notestracker.net

There’s a lot more of general value on that page, go check it out!

Signing is usually required when you obtain a Notes application from an external source, or before your own in-house-developed applications are moved from the development stage into productions.

Simple Signer was developed to make application signing easy for anybody to carry out.

UPDATE: Please download a refreshed copy of Simple Signer v1.2 that was uploaded on 23rd June, without local encryption (which was causing the error "This database has local access protection"). Apologies for the slip up.

The self-extractor requires a PASSWORD … NotesTracker (what else would you expect from me?)

Apart from a few minor changes, the main enhancement is the ability to keep an audit trail of the various database signing events, for example:

Simple Signer’s design is unhidden (“open source” more or less, you might call it) so you can tweak it to work exactly how you like.

Signing is usually required when you obtain a Notes application from an external source, or before your own in-house-developed applications are moved from the development stage into productions.

Simple Signer was developed to make application signing easy for anybody to carry out.

The self-extractor requires a password, which is NotesTracker (what else would you expect from me?)

Apart from a few minor changes, the main enhancement is the ability to keep an audit trail of the various database signing events, for example:

Simple Signer;s design is unhidden (“open source” more or less, you might call it) so you can tweak it to work exactly how you like.

Just found out that I’m strong minded… Are you?


I have no attribution for this, but I surprised myself by tearing through it like greased lightning. At warp speed, in fact, which you would expect from a warped mind like mine! 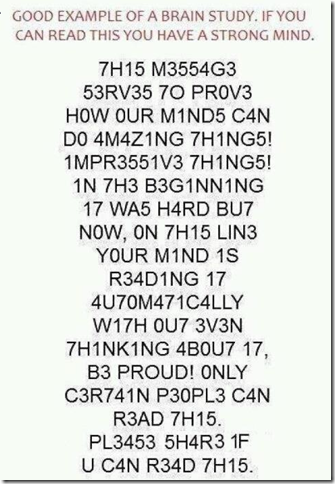 I have today installed the recently-released Windows 8 Release Preview.

As I did with the earlier Consumer Preview version, I installed it as a virtual machine running under Oracle VM VirtualBox Manager (which as you may know came to Oracle as part of the Sun Microsystems acquisition, but  started off before that a German product).

Here’s the Windows 8  Release Preview, running in desktop mode, as I would only want it to be on my main work and development system: 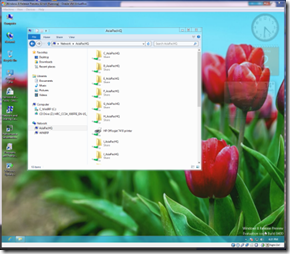 I might look pretty, but so far I’ve found it VERY, VERY awkward to use via mouse and keyboard, compared with Windows 7 (and all previous Windows releases that I’ve used, back to Windows 3.0).

Keep in mind that I’ve been using all sorts of computer systems since joining IBM in 1970 (and even for a few years before that), so I cannot in any way be considered a mere beginner.

I certainly do understand that Microsoft is trying its very darnedest to move its cash cow user base along into the touchscreen/tablet world. That makes a lot of sense for a sizeable proportion of the emerging market. If I had a tablet PC, I assuredly would like the “metro” mode that Windows 8 embraces.

But, frankly, as a “power user” (intense technical user) I find the “metro” mode to be extremely annoying and timewasting.

The icons occupy far too much screen real estate, the constant swiping is highly frustrating (especially when using  mouse to mimic finger movement), and what was a single click under Windows 7 (and its predecessors) now usually will take several clumsy actions under Windows 8. Multiply all those extra swipe/click actions by the  hundreds of times per day that I carry them out, and it results in a major loss in productivity for me – and, I’m pretty confident to postulate, for a big slab of potential Windows 8 users.

As shown in earlier Blogger posts of mine, such as this one and this one, I happen to use four 1600x1200 monitors arranged in an inverted T fashion (enabling me to open windows as wide as 4800 pixels or as tall as 2400 pixels), often with numerous  windows open on the various monitors:

Now, I understand that (compared with the earlier Consumer Preview version) the Windows 8 Release Preview apparently supports multiple monitors, but since VirtualBox only emulates a single monitor [as far as I know] couldn’t test this.

The support of multiple monitors has been outstanding since at least Windows XP, so I wouldn’t expect any less for Windows 8. I wonder whether the experience would work for multiple touchscreens running in “metro” mode (has anyone tried it?).

What I wanted near the very start of Windows 8 installation was a single radio button or checkbox option to have installed Windows 8 in a pure desktop mode, identical (or as closely as possible) to the way that Windows 7 and earlier version get installed, with all the old Windows 7 style features supported in as close as possible to the same way.

Why impose a far from trivial re-learning effort on users of previous Windows versions by foisting the “metro” way of doing things upon them when they’re still using non-touchscreen PCs? … Let them enjoy the new mode when they get their first touchscreen device.

So far, I’ve spent 3 or 4 hours fiddling with Windows 8 options that have only got me a small way along the path of making Windows 8 desktop look, feel and act like Windows 7 desktop. It’s been an extremely frustrating experience, and I suspect that it’s bound to fail not much further along the path. This is NOT good news for all of those confirmed Windows desktop mode users out there!

Microsoft made the move from Windows 200 to Windows XP not too difficult, with only a few things rearranged and/or hidden away in different spots. The move to Windows Vista was a bit more dramatic, but not unmanageable, Windows 7 was IMHO easier than Vista.

Based on my limited trials, but a good “gut feel” after decades in the industry, I reckon that moving to Windows 8 is going to be a real nightmare for users upgrading from earlier Windows versions.

However I surmise that the Windows 8 experience will be quite pleasant and rewarding for all those users – possibly a very large proportion – who get Windows 8 preinstalled on a tablet device. And this is where Microsoft is making a big gamble, I suppose. Time will tell.

What would a reactionary old codger like me know, anyway? … Then again, perhaps I’m not so technologically unaware as this other old-timer (it starts with a few sentences in German, no need for a translation, you will guess the meaning):