Late in January 2013 I upgraded my main desktop  work system from Windows 7 Ultimate to Windows 8 Pro (both 64-bit), which went quite smoothly on the whole.

I had problems with an external hard disk docking device’s USB 3.0 driver that took some trouble to sort out. The dock would run in USB 2.0 mode only until I eventually found an updated driver that gave back the USB 3.0 capability I had been enjoying under Windows 7. Usually Windows Update does all this, but in this case it not discover the updated driver, and in the end I had to telephone the manufacturer in the USA to get the required information.

So now I have the desktop system running almost exactly like Windows 7, at full productivity and avoiding the stupid “Modern UI” tiled approach that is not at all appropriate for a non-touchscreen desktop system. (Just last week I purchased a touchscreen slate device running Windows 8 Pro, and the tiled UI works reasonably well in that environment.)

However I am experiencing a major Windows networking problem at the moment, which remains unresolved despite my spending many hours seeking a solution. (I think this problem arose only in the last month or so, but I experiment with a vast amount of software that might be responsible, and am unsure about the timing and about any possible cause.)

I run a simple Windows workgroup (no domain or homegroup), and utilize the username/password method to control all logins across the network.

The symptom is that, while the main system cannot access any of the other Windows systems, including my new Windows 8 tablet, the others can access each other across the network but none can gain access to the main Windows 8 system.

UPDATE:
The following screenshot should help in explaining what I now get -- on the Windows 8 main system -- with Windows Explorer (a.k.a. File Explorer) when I attempt to browse from the main system to other systems:

I know from painful experience in past years that this is a network browsing issue, so on the main Windows 8 system I immediately went to the Network and Sharing Center panel with Change advanced sharing settings and clicked on it: 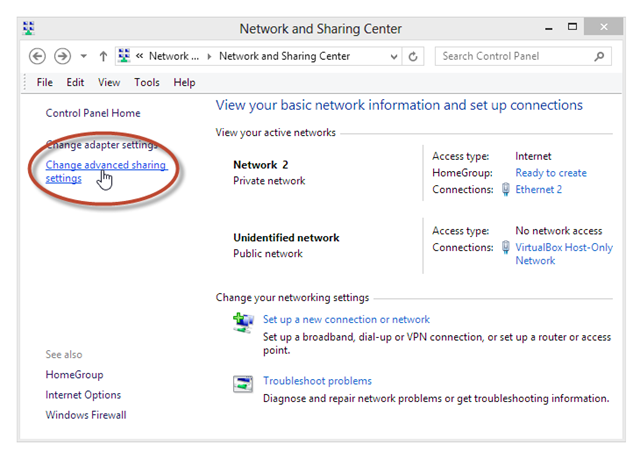 From past experience with Windows 7 I know that this networking problem is usually solved by ensuring that network discovery is turned on, which is done by selecting the following  two circled radio buttons: However after doing this (and saving the changes) I found that the networking issue remained. Upon returning to the Advanced sharing settings panel I found that these two settings were still turned off. Repeating the steps always came up with the same result: network discovery always remains off.

I have spent many hours scouring the Web looking for a resolution, to no avail. Others have encountered the same issue, but none of the suggested solutions (such as ensuring that a certain set of Windows services all are started)  had any effect on my system.

What can be causing these two network discovery radio buttons always to switch back to the OFF position (or, more correctly, never to be allowed to switch to the ON position)? A key observation is that whenever I temporarily turn Windows Firewall off, the networking access issue goes away, and when I turn the Firewall back on the issue comes back.

So far, I have not been able to determine what Windows Firewall configuration setting or feature/function could be causing this. Certainly it’s not die to some deliberate action on my part.
I have tried the troubleshooter, to no avail: 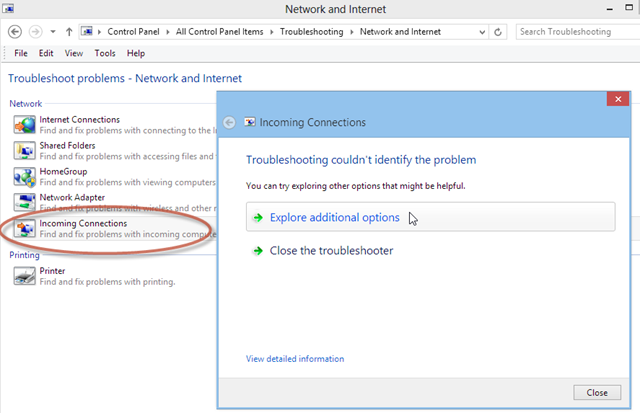 I've examined Windows Firewall settings, to no avail (not that I’m an expert in this field): 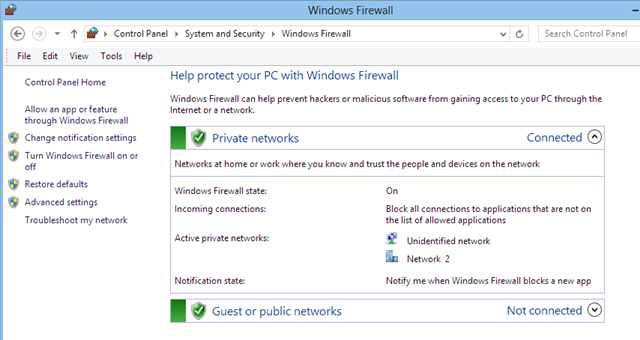 I've looked at various group policy settings, to no avail. I’m even less of an expert here, and could easily be looking in the wrong places: 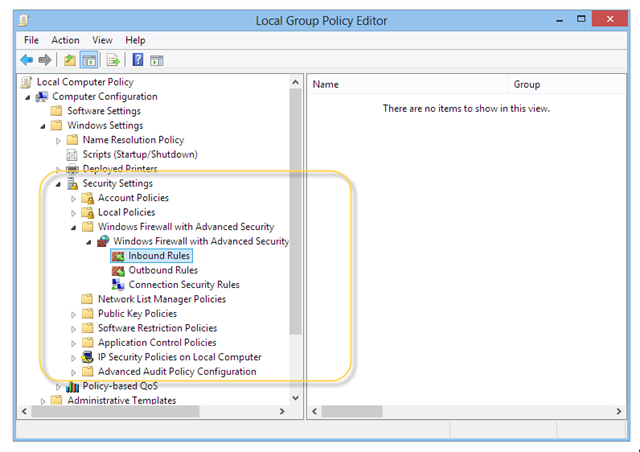 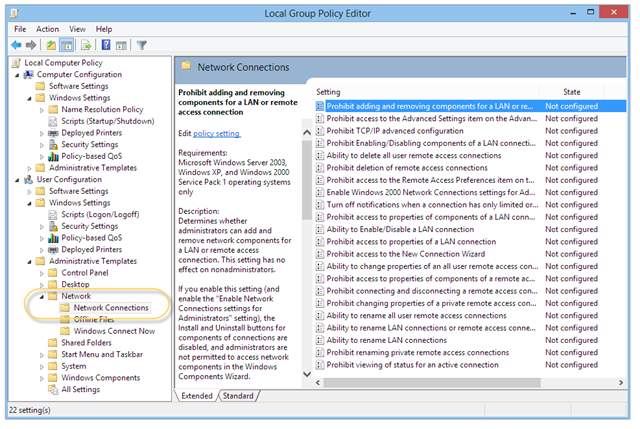 One possible inkling of what might be awry in my main Windows 8 system comes from digging into the Allow an app or feature through Windows Firewall settings: 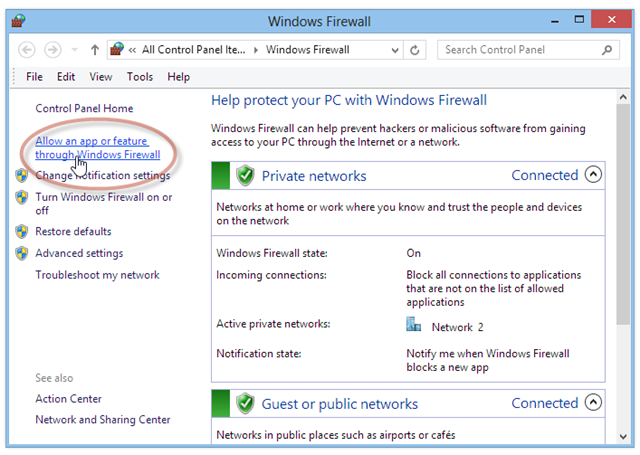 This yields a list of applications, in alphabetical order, the central part of which is: 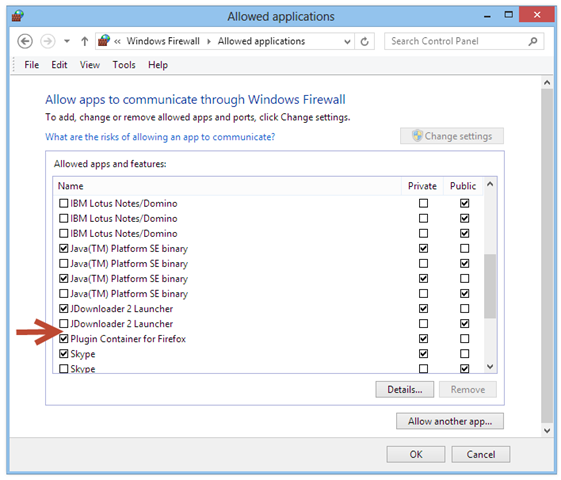 My friend Paul in Canberra took time out the other day to have a look inside Windows Firewall on his Windows 8 system, and pointed out that he had an entry for Network Discovery. (Thanks Paul, this gave me a promising new area to explore.)

When I examine this list in a virtual test machine, as expected I get a different list, but the interesting thing is that – unlike on my main Windows 8 system – this virtual system  contains an entry for Network Discovery: 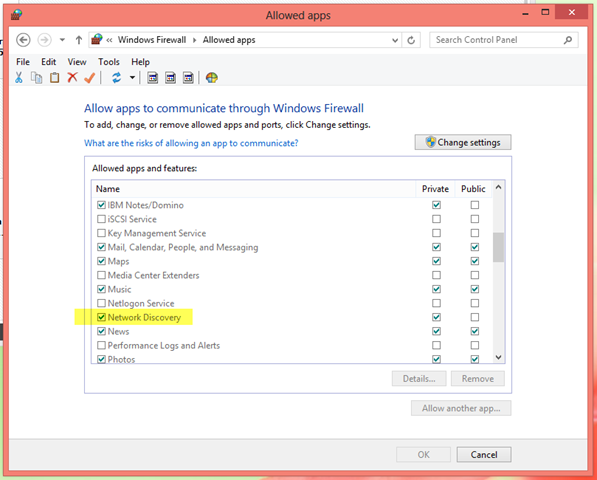 So this is where I’m at today.  Why doesn’t my system have this Network Discovery entry in the Windows Firewall list of allowed apps? It’s certainly not due to some explicit action that I took. I have that certain feeling that this is related to why I cannot turn network discovery on unless Windows Firewall is turned off.

Any feedback and suggestions would be most welcome!

A way to repair Windows Firewall, and Windows connectivity problems resuming from Sleep mode
BE SURE TO VISIT THIS LATER POST