Using SiteMeter I've been tracking browser share (and other statistics) since putting up my web site four or five years ago: asiapac.com.au and later its mirror image notestracker.com

A couple of years ago Internet Explorer (IE), in its various versions, consistently represented more than 90 percent of site visits. For many months IE had around 97% to 98% of browser share.

It has been interesting to watch the steady growth of Firefox during the last year or two. It's the only other browser that has ever exceeded one or two percent of site visits.

My web site has a quite constant visit rate, even if not very high one compared with lots of others. I've found that for the last three or four months the Firefox visit share has been fluctuating quite a lot from week to week, ranging between 10% and 20% but tending more towards the latter. To illustrate, here are the figures for 13 March 2006: 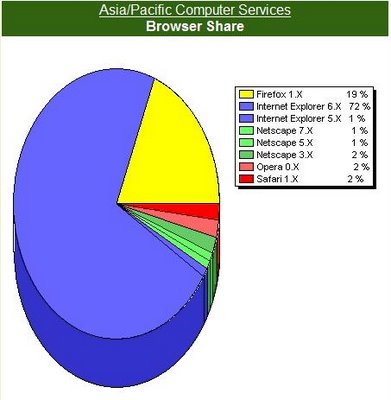 And what about two days later? Here is the breakdown for "the ides of March" (bad for Julius Caesar, bad for Firefox): 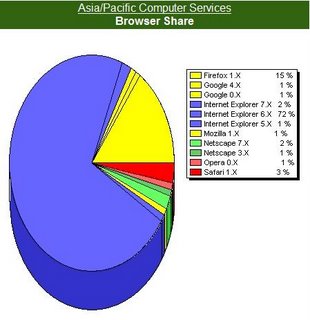 These seems to correlate fairly well with statistics from sources such as Browser News, as per their report for today: 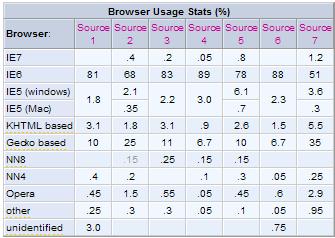 I wonder what the eventual impact of IE7 will be. It won't be for a year or so that we can assess IE7's popularity. (I've tried out the IE7 Beta2 and it seems quite nice, but with quite a functional and usability issues -- quite limited tailorability, shortcomings in tabbing capabilities, inconsistencies with keystroke binding, and more -- which I sincerely hope Microsoft will address before the final release.)

UPDATE - 22 April 2006:
Today, the Firefox share reached its highest ever, at very close to one quarter of visits to asiapac.com.au -- combined with its mirror at notestracker.com that is. 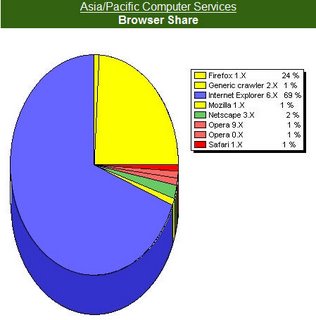 What with the release of Internet Explorer 7 (IE7) still months away -- perhaps late 2006 -- it looks as though Firefox will continue to gain an even healthier share in the renewed "battle of the browsers". Meanwhile Opera 9 Beta has just been announced, introducing Widgets, content blocker and integrated BitTorrent support.
Posted by NotesTracker - Tony Austin at 3/13/2006 12:18:00 PM No comments:

2005 and 2006 have certainly been good ones for those seeking inexpensive or free databases.

Not only were there already free open-source DBMSs such as MySQL as well as related toolkits like Hibernate, but most recently (in late 2005 and early 2006) the three major vendors in the DB arena themselves came out with no-charge versions of their key commercial database products.


It could be a while before I have the the time to install and try out any of these three well-respected DB products, but I'm really looking forward to doing so.

There are many things to be considered, and I merely note here that the IBM DB2 Express-C offering does not restrict a database's size to 4 GB and this alone would differentiate it as the product of choice for those databases which you expect will need to store more than 4 GB of data. (This could easily be the case, for example, when there are lots of BLOBs.)
Posted by NotesTracker - Tony Austin at 3/08/2006 06:27:00 PM No comments:

In one of his best statements on the fabulous Mythbusters television show, when as often happens (which is the real beauty of the series) one of the experiments doesn't turn out as expected, co-host Adam Savage says: "I reject your reality and substitute my own." Maybe they're moving into computer programming -- lots of myths there -- you can also see them here with "father of Java" James Gosling.

This could be a useful approach to adopt with the currently much-hyped "Web 2.0"with all the articles being written about it, all the claims being made by all and sundry, all the AJAX toolkits appearing out of the woodwork, and the lack of any real agreement about exactly what it all means. Mix that in with the "acronym soup" that we're faced with these days -- SOAP, WSDL, SOA and ESB, WSDL, BPEL, and a myriad others -- and it would be a brave person who claimed to understand what it all means.

CIOs and other IT management therefore have a really tough time ahead of them to make sense of it all and decide which parts of the jumble should be used to further the success of their organizations. An interesting recent article by Edward Cone at Ziff Davis' CIO Insight magazine discusses this: Web 2.0 Reality Check

I encourage you to read the entire article, but a few points made in it are:


Much food for thought here.

Joel Spolsky comments in his inimitable fashion that the Architecture Astronauts Are Back with their "meaningless stringing-together of new economy buzzwords in an attempt to sound erudite" and "The term Web 2.0 particularly bugs me. It's not a real concept. It has no meaning. It's a big, vague, nebulous cloud of pure architectural nothingness."

Today's environment is certainly a far cry from the overnight batch runs, fed by punched cards and generating boxes and boxes of printouts, which was still in vogue when I started with IBM in 1970. New-fangled IBM 3270 CRT "green screens" were starting to be introduced in early-adopter mainframe customer accounts, offering direct data entry and immediate display of results and being seen as the wave of the future. We didn't realize it then, but life really was simple in the good old days.

I reckon that it's all actually heading asymptotically towards "Web Pi" or "Web π" -- you know, Pi, the transcendental and irrational number (with a value of roughly 3.14159 26536 to a mere ten decimal places).

We're on our merry way towards "Web Pi in the sky" you could say! The decimal places go on endlessly -- which is what seems to be happening with all of the opinionating and soothsaying about the future of the Web and where information technology is heading. We'll never ever reach our target, but this will provide more opportunity for the technobabble to pour forth and inundate us all.

And if all the word traffic about "Web 2.0" isn't enough, there's another plethora of gobbledegook related to Web Services Architecture ... So many standards have arisen that they need to be referred to generically as WS-* (where the asterisk presumably represents an infinite number)!

UPDATE [30 May 2006]:
Richard MacManus in his Read/WriteWeb weblog has recently commented about the Top Ten Underserved Web 2.0 Markets and in that article points out the following Web 2.0 catalogs: eConsultant's Web 2.0 Directory and Sacred Cow Dung - All Things Web 2.0 -- but nobody yet seems to have started on a Web 3.0 catalog, how bitterly disappointing!
Posted by NotesTracker - Tony Austin at 3/03/2006 12:55:00 PM No comments:

Perchance to happen upon Serendipity

"Turn off the BlackBerry for a while. Wander—literally or in our minds—with no particular destination. Embrace a little inefficiency and the possibility of greatness that comes with it. Let apples fall on our heads."

For example, five or six years ago, I had a chance meeting with an acquaintance which led to a long and fruitful consulting assignement. In contrast, several months of marketing had not come up with any significant assignments or sales. And like Kekulé I have sometimes woken from a dream with a great idea, have had an inspiration while taking a shower, and have come across key information while casually browsing a book or magazine or while surfing the Web.

How about you? How much has happenstance and serendipity benefited you in your life and work?

It's the old story of "perspiration versus inspiration" ... You must be ready to recognize the occasional serendipitous event when it occurs and welcome it with open arms!
Posted by NotesTracker - Tony Austin at 3/02/2006 11:26:00 AM No comments: