It’s a battle to keep up with all the information available on the fabulous World Wide Web.

There’s so much out there on innumerable web sites and blogs that every now and then you come across fascinating information only by chance. Indeed the StumbleUpon site is built on this very aspect.

A site that I’ve just stumbled upon all by myself is CONFLICT HISTORY where you can browse the time of wars and conflicts across the globe.

It’s based on Google Maps and there’s a slider at the bottom where you select a particular time period. You can expand/collapse a table in the top left, and use this table to provide a link to each war or battle (and there’s a Wikipedia cross reference for each). 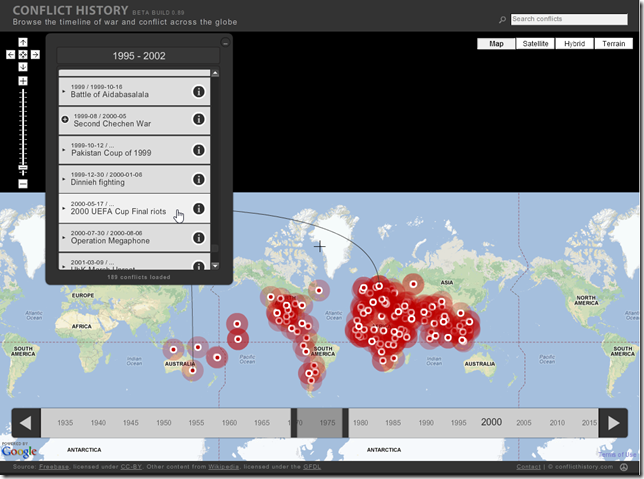 Yes, all sorts of events have been selected as conflicts, which adds to the fascination. In the above example, also included is an accumulation of places on Earth that I previously browsed, fortunately they didn’t all apply to the 1995 – 2002 time period!

It’s a sad indictment on mankind that there’s nary a time period nor place on the globe which is (or has been, at some point in history) free of conflict.

UPDATE:
The site is working at the moment (23 February 2013). Just ignore the initial message and close the black dialog box:

The first of an occasional series of opinion pieces about poorly executed software design and development, missed opportunities to do a lot better.

Since I’m still coming to terms with Windows 8 after upgrading from Windows 7 a month ago, why not start here?

Their reasons for change all make sense, lots of telemetry and so on. Except in typical Microsoft fashion they weren’t thorough enough in their implementation and stopped short in some important aspects.

One of these is shown in the following screenshot of the “Processes” view: 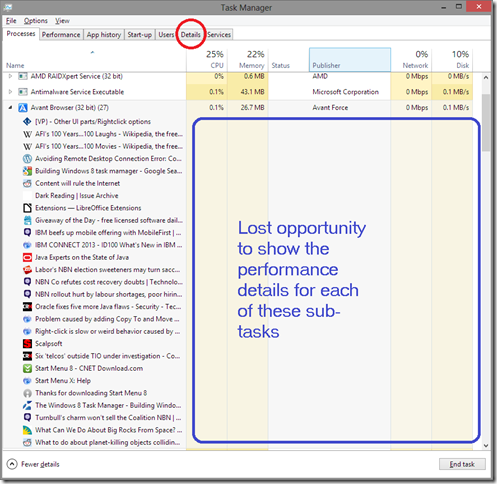 It focuses on Avant Browser (in many ways superior to Internet Explorer) with multiple tabs open. Notice the large blank area (blue rectangle)? In this area they really should have taken the opportunity to list the detailed usage of CPU, Memory, Network and Disk  for each of the browser tabs (sub-tasks) open in the browser.

This would be extremely valuable information to present, such as the fairly common situation where one of the tabs is chewing up a lot more resources than the others and you’re struggling to understand which of the tabs is the one causing the browser to run slowly or erratically.

Another lost opportunity is that the tabs across the top of the Task Manager window are fixed in position. They really should have made the tabs draggable so that you can rearrange them to suit your needs, and the last-used arrangement remembered when Task Manager is next opened.

In a month or so of intense Windows 8 usage I find myself still using the good old Details tab a lot because it shows tasks that don’t appear in the Processes view, and I want it on the left.. I Want it to be the default whenever Task Manager is opened, but alas the Processes tab always opens on the left and the last-used view of Task Manager if not remembered.

Curse them! There are some really smart people at Microsoft. Why do they come out with such stupid implementations? A big FAIL for their design-by-committee approach, I ‘d say.

Do husbands and wives ever fully understand each other?


Now that really is a basic question!

Thanks to Scott Hilburn’s “Wife of Pi” comic of 08 February 2013 for leading me to ponder this most problematic of matters:

More of his works at The Argyle Sweater.

That’s a pretty decent ‘basic question’ is it not?

I got to thinking about it after coming across the following article:
Don’t Let Perfection Be a Barrier to Improvement

If you know of something that can be done to make a process better and you intentionally choose to leave the issue unresolved, you are violating the principle of zero defects. But if you overspend your resources for a small gain when there is a bigger gain available somewhere else, your actions violate the ‘better, not perfect’ principle.

So, which is right?

I suggest that you read this short article too, including the comments.