Well, it’s the final day of the 2013 calendar year and a good time to consider what you should do for 2014 (and beyond).

I’d recommend that you mosey on over to SlideShare and look at 99 Facts on The Future of Business assembled from a wide range of sources by SAP:

Business Innovation is the key ingredient for growth in the future of business. Changes in technology, new customer expectations, a re-defined contract between employees and employers, strained resources, and business and social networks are requiring businesses to become insight-driven businesses.

In this presentation, we have gathered 99 facts that represent the changes taking place in the world today. Each facts represents a key insight and suggests where we need to focus and change to become viable, sustainable and growing future businesses.

Some of the slides present mind-boggling facts and statistics that should be relevant to planning for any organization, big or small (and not just businesses either), and even for us as individuals.

A few of the 99 factoids, taken at random: 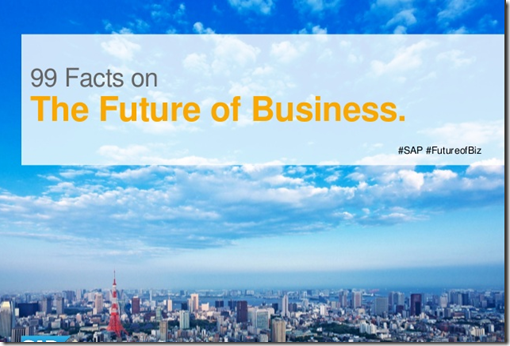 What could free software mean to a programmer?

From geek-and-poke.com … See other geeky cartoons there! 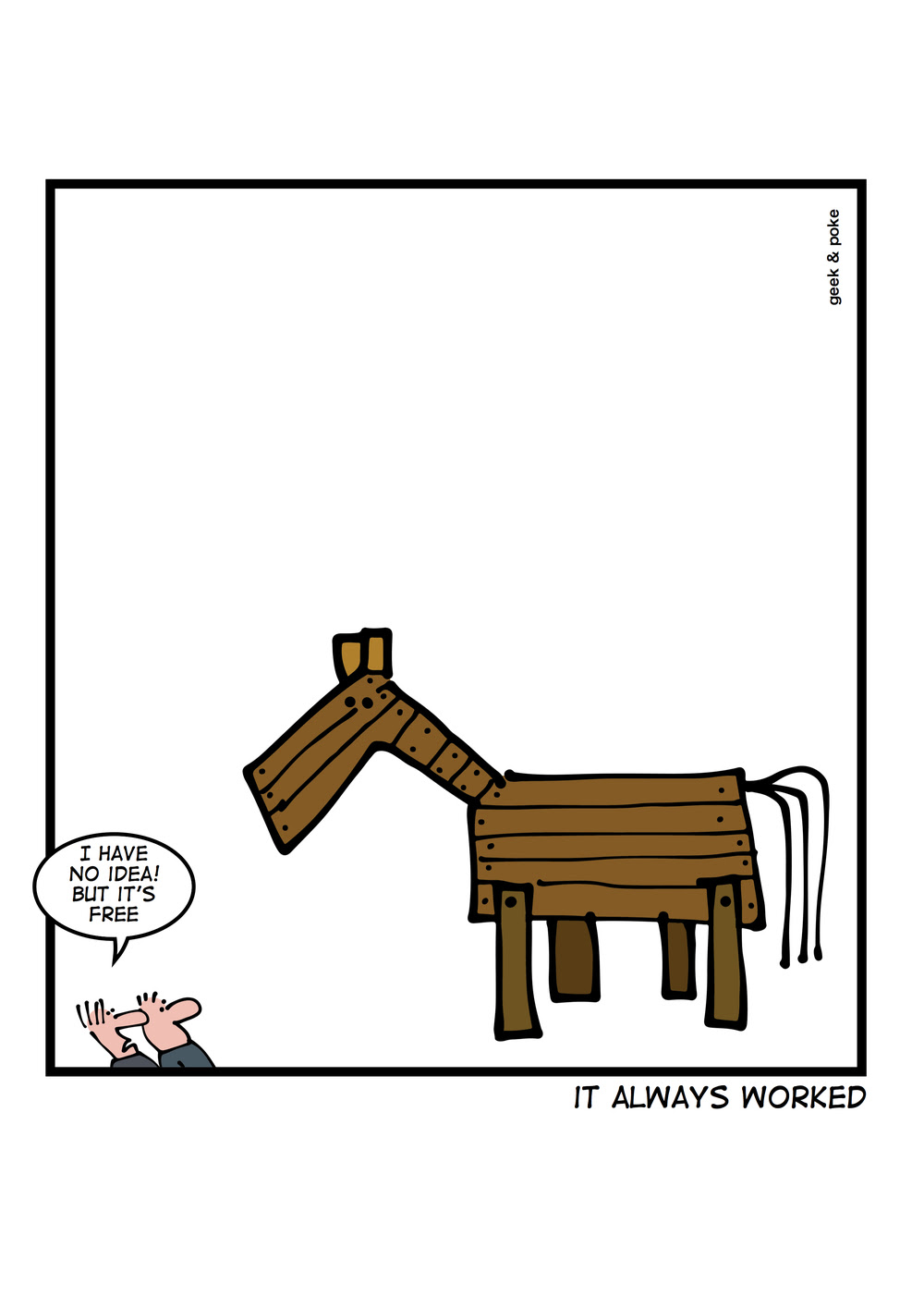 For more holiday season reading for programmers, take a look at this lengthy article at stackoverflow …

What is the best comment in source code you have ever encountered?

When parts of Microsoft Windows start behaving oddly or even completely stop operating it can be painful in the extreme trying to find a fix or a workaround.

Why not get support from Microsoft, you ask? Well, yes and no. Microsoft’s support website site is vast, and it’s a hit-and-miss affair to find any solution for your problem.

Success often lies with the vast user base of Windows -- in the hundreds of millions if not billions. If you’re persistent enough, sometimes more by chance more than anything else you’ll sooner or later find a forum or blog or a team of Windows specialists out there to help define and solve problem. In the early days of Windows this rarely happened, but these days it’s a lot more likely that you’ll hit the jackpot somewhere in the large community of Windows users..

The problem I’m discussing in this post occurred on some but not all of my Windows 7 systems, and happens on my Windows 8.0 desktop system yet not on Asus Slate touchscreen system (which also runs Windows 8.0).

Here’s the symptom: when I hover the mouse over an icon in the “system tray” -- more properly called the “notification area” -- the tooltips do not pop up on top, they are  partially (in some cases completely) obscured by the task bar. This equally applies to the pop-up panel that displays the so-called inactive icons.

I probably have quite a few more inactive icons than most people because I have tons of applications installed. Screenshot 1 shows the inactive icons panel being invoked on my desktop PC: 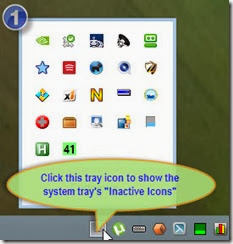 Once the above panel has opened, I found when I moved the mouse pointer to any one of the hidden (inactive) icons that each tooltip (pop-up help text) was always either partially or totally obscured by the panel (screenshot 2): 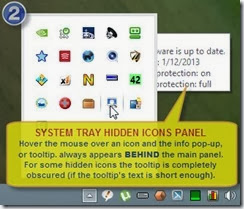 This has usually led me to move the mouse around the panel and hover it over different inactive icons, sometimes with the icon’s tooltip completely obscured, until by trial and error I came to the icon that I wanted to invoke at that time.

As I mentioned earlier in this post on some of my Windows systems this does not occur, so it’s pertinent to ask what causes this to happen and what can be done to get rid of the annoyance.

To cut a long story short, after several hours of research spread over some days (because it took me a while to determine some potential solutions and test them all).

The only success I had was in using one of the freeware utilities from Nir Sofer’s  bountiful website.

The tool of choice to download for fixing this problem is NirCmd which is a command-line utility having virtually a million-and-one divergent uses. The 32-bit and 64-bit NirCmd downloads are near the bottom of that page, as is the following link to the NirCmd Full Help File.

In my case, after extracting the command from its zip container I moved it into the C:\UTILS folder (adjust the example below to match your own choice of folder).

Since it is inconvenient to repetitively run NirCmd from a command-line [via a DOS command prompt window[, I decided to create a BAT file (in the UTILS folder, which is in my system PATH environment variable) called TooltipsFixer.bat which contained the following:

@echo Tooltips should no longer be obscured by the Task Bar ...
C:\UTILS\nircmd.exe win settopmost class "tooltips_class32" 1

Then I created a shortcut to the TooltipsFixer.bat file and placed it in a convenient place for repetitive use.

That’s because the problem keeps cropping up, therefore I need to run this BAT file most times that I access the inactive icons panel. One of the other solutions launches a Windows service that runs in the background and does away with the need to repeatedly correct the problem, which would be nice, but it didn’t work for me.

Problem solved. I’m still rather peeved that this issue cropped up in the first place, and wonder why it affects some systems yet not others (anybody know why?).

Google’s Blogger/BlogSpot commenting can “go cactus” on you

Today I kept failing to add a comment to one of my very own blog posts at Google’s BlogSpot (blogger.com). It had “gone cactus” on me, to use an Aussie term.

It was for the first time in a while, and hadn’t ever had this problem before. I was properly logged in with my Google account, typed a response, but whenever I clicked on the Submit button nothing appeared to happen, repeatedly.

RESOLUTION:
After messing around for some time managed to get it working again by editing my Blogger profile and changing one of the commenting options: 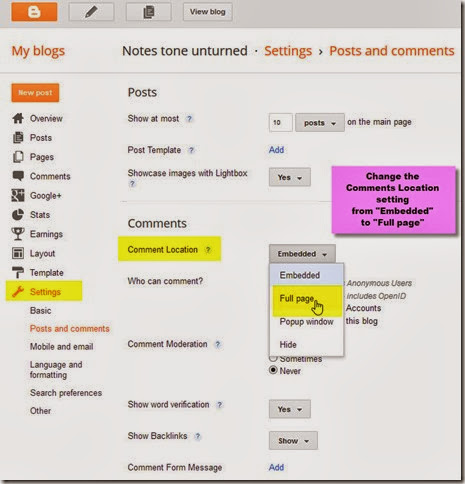 The comments had been set to be “Embedded” which shouldn’t have been problematic but apparently was. I tried the up window” setting, but to no avail.

However when I altered the Comment Location setting to “Full page” the issue was resolved (I was again able to add comments to posts),

What caused all this is beyond me, but it worked and that’s all that I’m interested in. And perhaps the same Comment Location setting change will work for other BlogSpot users too.