In my blog section over at iTWire I’ve highlighted a new European Commission report on open standards, a topic that I’ve been extremely interested in for decades (during my long time at IBM, and now as an independent consultant).

Here’s the link to that article. Go take a peek at it since there’s lots of interesting/important content:

A pragmatic European approach to open standards (a must-read)
Sunday, 09 November 2008
The European Journal of ePractice has just published a research report showing that the achievement of wide-scale implementation depends not only on the openness of the process, but also on the willingness to negotiate and achieve a compromise.

Today has been a busy day for me. While preparing for a presentation tomorrow, I’ve been dusting off my Lotus Notes freeware applications, checking them out and making small design tweaks here and there. This is the final one in the bundle.

Because of the strong security model that has always been one of the major features of Lotus Notes right from its outset, it is sometimes necessary to “sign” a database before it will work properly in your organization’s operating environment.

Here follows a brief, highly simplified explanation. It is definitely NOT intended to act as a tutorial in Lotus Notes/Domino security.

When the Notes database application was built, its design elements (components such as forms, views, frames, framesets, agents and much more) were all created by one or more developers. These design elements would have been given the “signature” of the original developer(s), which may not be (and generally should not be) adequate to pass the runtime security in your organization’s production environment.

In many but not all cases, it is sufficient to sign all of the design elements with an appropriately-authorized person’s Notes ID. This is exactly what Simple Signer does, in a few easy-to-perform steps.

STEP 1: Open the Simple Signer database. If necessary, switch to the desired the signing user’s ID file (top button), then click on the lower button (as shown by the red arrow) to select the database to be signed.

STEP 2: Use the normal “Choose Database” dialog to locate and select the desired database. 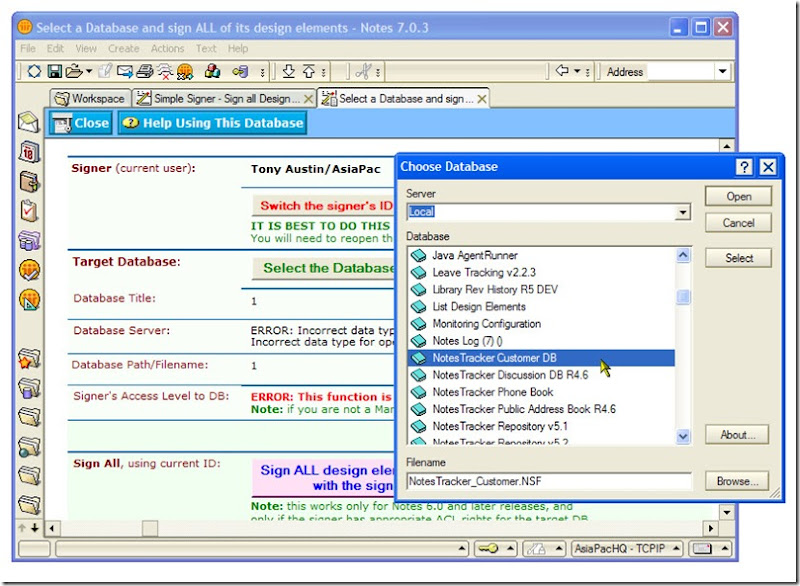 STEP 3: The selected database’s title, server and path are shown. Click on the lower button to sign ALL of the design elements in this database. 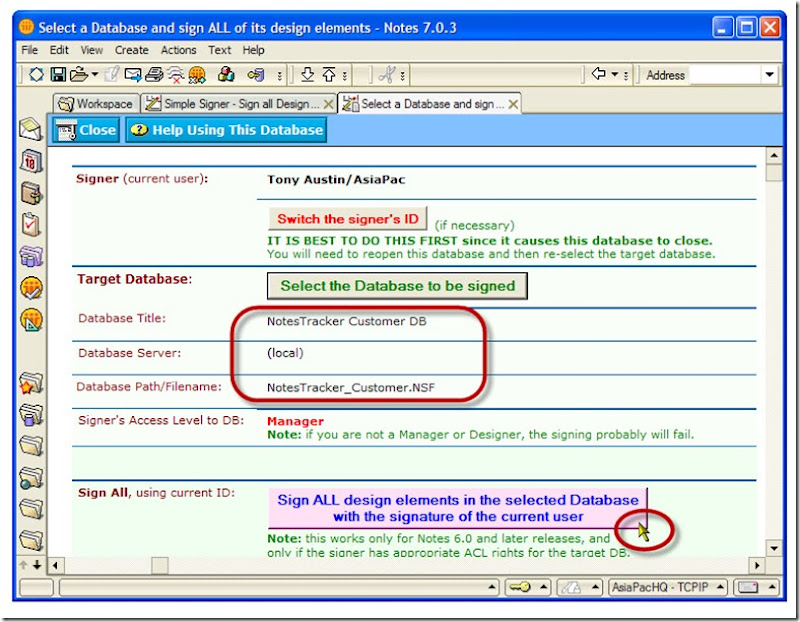 If your Notes ID has adequate signing authority for this particular database, it will be signed, else you’ll be informed that the signing process failed.

Remember that this is called the “Simple Signer” and it’s not meant (as distributed) to cope with  complex signing requirements.

Because the Simple Signer’s design is not hidden, your can get your Notes developer to tailor the design to cope with more complex signing requirements. Otherwise, purchase a more powerful tool.

Simple Signer is a FREE tool designed to carry out a common, basic sign-everything-with-the-same-Notes-ID process and to do it both easily and quickly. … No more, no less. No apologies!

You can obtain your free copy from here or here.

I don’t give many presentations these days, but expect to do so tomorrow afternoon at the Melbourne (Australia) Lotus User Group meeting.

So I took out my unique little “Presenter for Lotus Notes” application and brushed up a few cobwebs on it. No new functionality, mainly some color changes to alternate view rows and little things like that.

But you are probably asking: “What on earth is Presenter for Notes?” 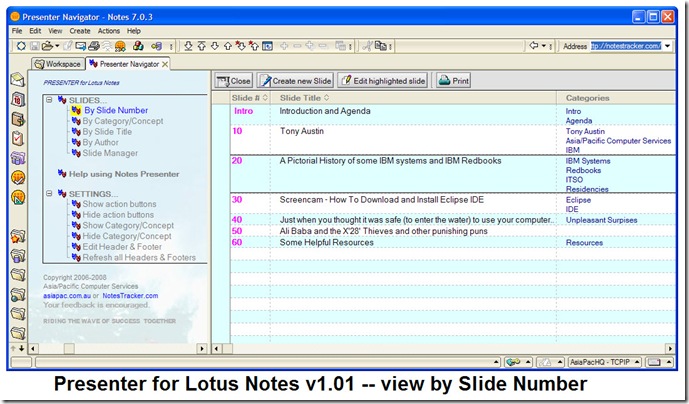 I once did industrial chemistry and high school chemistry/mathematics teaching, then spent a long time at IBM (from 1970 to the mid-1990s, now retired), and find myself as a consultant still in IT 39 years after starting at IBM. My fortieth year in IT begins next January, is that good or bad I keep asking myself.

During all that time, I’ve seen a vast number of lessons, lectures, business presentations and the like. In the early days, they were done on blackboards and paper. Later overhead projectors were in vogue, with their transparent plastic “foils.” These foils, in any quantity, weighed a ton and weren’t much fun to prepare, distribute and lug around (as I can attest from giving lots of IBM presentations across Australia, and Asia while supporting the IBM System/38 and AS/400 and other systems).

Then in the 1980s and 1990s, along came Lotus Freelance and Microsoft PowerPoint and suchlike. A better thing? On the whole, probably so.

But overdone to the nth degree. Now we have PowerPoint presentations in plague proportions! See here or here (especially look at the articles about “Unplug that projector” and “Drag and drop” and “warts” and “disaster”).

When I was to give a presentation several years ago, I asked myself if there was a different and/or better way. 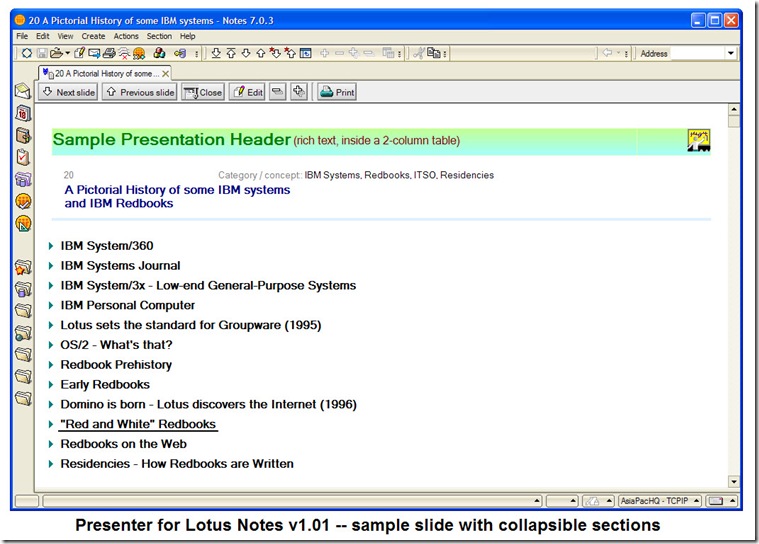 The rationale for having a tool like Notes Presenter is briefly outlined in an earlier blog post of mine, see Notes Presenter -- Let's eat our own dog food with more details on the download page given above. There’s a user guide built in to the database, in the “Help Using This Database” document.

You can use Presenter not just for preparing and giving presentations via a Lotus Notes Client, but also for packaging and delivering virtually any Notes applications (databases) together with any sort of related supporting files: executables, documents, data files (even other Notes databases, including design templates), and much more.

You could, as just one example, hold different versions/releases of a Notes application suite – or a presentation, or anything else -- either inside [separate documents held in] a single Presenter database or in multiple Presenter databases each one dedicated to s single version/release.

In fact, whatever can be attached to a Notes rich text field can be delivered via a Presenter database as one tidy self-contained package. 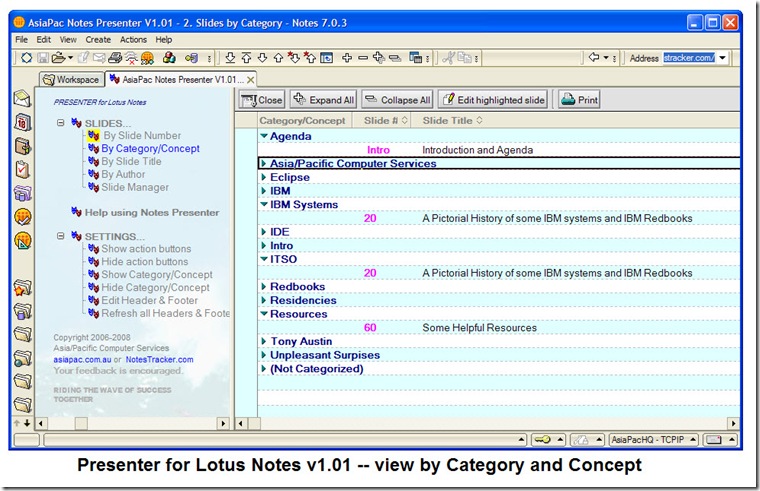 With the various Presenter views (such as the view by Category/Concept shown just above), and via full-text search, you can quickly and easily locate a particular slide or group of slides related to a given topic.

For example, in the question time at the end of a pitch,  somebody asks you about a particular term you used that’s buried deep within one of many slides. Use a full-text search to rapidly locate that slide instead of fumbling around (as I’ve seen happen a number of times) and perhaps not even be able to find that slide again.

There’s a lot more I could say, but let me just say that if you’re a Lotus Notes Client user you should “eat your own dog food” and avoid using PowerPoint wherever possible. Download Presenter for Lotus Notes and go try it out!