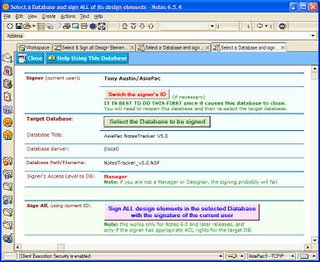 This is a deliberately simple tool enabling you to select any Lotus Notes database -- local, or on a Lotus Domino server -- and then to sign all of that database's design elements (forms, views, agents, etc).

It has a single purpose: to make the database signing process as easy and straightforward as possible, even for Lotus Notes users with little or no technical background.

Following the KISS principle it's "a simple tool for a single task."

And it's free for you to use wherever and however you like... ENJOY!


Note: The design of the Simple Signer application is not hidden. There's a tip (in the Help Using This Database document) for modifying its design so that you can select for signing only specific type(s) of design elements, such as forms or views. As provided, the Simple Signer will sign all design elements in the target database, which is the commonest requirement.

I was just reviewing the abstract of a new article at INSEAD ("The Business School for the World"):

Doctor, Heal Thyself - Five Pitfalls in Decisions about Diagnosis and Prescribing ... The consequences of medical misdiagnoses are often catastrophic. Some psychologists hold that doctors are guided by heuristics-based cognitive processes that allow them to make constant on-the-spot decisions. Associate Professor of Marketing and Doctor of Social Psychology Jill Klein outlines five examples of the most common forms of cognitive biases that can, however unwittingly, thwart doctors' best-laid plans.

It seems to me that these biases could pretty well be ascribed, in varying degrees, to those involved in software development, at all stages (design, debugging, testing, deployment, project management, etc). Wouldn't you agree?

Can you suggest any other biases, for any other sort of professional activity or occupation? ... Time for some lawyer jokes, perhaps? Golfers? Clergymen? Salespeople? Politicians?
Posted by NotesTracker - Tony Austin at 4/14/2006 09:38:00 AM No comments: