How to stop Samsung 204B LCD monitor blackouts

Here’s a tip that hopefully will assist those who have Samsung 204B LCD monitors and who are encountering random momentary blackouts. (It might help with some other monitor models too, or at least give you some extra ideas.) 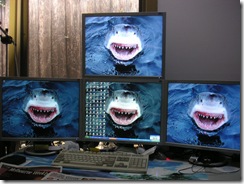 A couple of years ago, tiring of the limitations of notebook PCs, I purchased a fast new dual-processor desktop system with two graphics cards. Each video card came with one DVI (digital) and one VGA (analog) adapter, and after a few months I had attached four very nice 1600 x 1200 Samsung 204B monitors, as shown adjacent, in a handy inverted-T arrangement.

Compared with only some five years ago, when a single 1600 x 1200 resolution CRT monitor could set you back well over a thousand dollars, today purchasing high quality LCD monitors is far less expensive, and it’s a false economy for any serious worker not to have at least two of them. Having three or four is just “icing on the cake” and won’t break the bank. I tend to have windows open all over the place, for monitoring e-mail, programming, web page and image design, blog monitoring an posting, and more.

TIP - The Samsung 204B has one additional advantage: you can rotate the monitor from landscape to portrait mode, the latter of course being extremely useful for intensively editing documents (such as the several weeks I spent carefully rewriting and extending the NotesTracker Version 5 Guide). Look for this feature next time you buy a monitor, and check that the vendor provides accompanying software to support the dual modes.

The only problem that I’ve ever encountered with the Samsung 204B monitors was this curious but also intensely irritating. There would be blackouts, each lasting a second or two, occasionally in rapid succession and with no easily discernable pattern of occurrence.

Apparently -- though Samsung doesn’t seem to have publicly admitted it -- this behavior results from the 204B model, running at native 1600 x 1200 resolution with 32-bit color depth and at 60 Hz refresh rate, not quite being able to cope with the 165 MHz transfer rate of the DVI interface. I only found out about this cause by scouring forums and blogs (see here, for example: http://forums.techpowerup.com/showthread.php?p=721013 ). When I originally encountered this problem in early 2007, it was resolved as suggested by such non-Samsung sources, by opening the NVIDIA Control Panel, selecting the obscurely-named “CVT reduced blank” timing option, and setting the refresh rate to a value slightly below the default 60 Hz.

All went swimmingly until a few days ago, when one of the two video cards failed. Upon checking, it looked as if the other one might be on its last legs, so I obtained two new cards each (preferring to have two identical models for ease of configuration). As before, each card had one DVI plus one VGA adapter.

When I fired up the system again, I soon found out that the blackouts had returned with a vengeance! Remembering the original solution, I blithely went about re-applying the original “CVT reduced blank” solution. However, I found that the NVIDIA Control Panel had been redesigned, and it took a frustrating fifteen or twenty minutes before I could even locate this setting again. (Why do software designers move things around between releases, making them hard to find?)

Simple, I thought, there’s an option if plain view to alter the refresh rate.But when I tried to enter a refresh rate of 59.90 I discovered that it ignore the decimal point and finished up with 5990 Hz instead. Frustration! What to do now?

Next, I clicked the “Advanced” button and the panel expanded out like this: 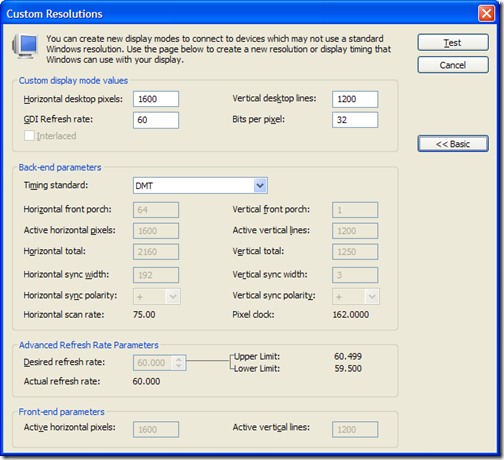 Aha, now I could see a “Timing standard” field. So I expanded the timing standard drop-down list, and was able to select the “CVT reduced blank” option. Problem solved, I said to myself:

But when I looked at the bottom of the panel, the “Desired refresh rate” was grayed out(greyed out, if you prefer). Throwing all caution to the wind, I selected the “Manual” timing standard option, and at long last was able to drop the refresh rate to a value slightly below 60.000 Hz, like this: 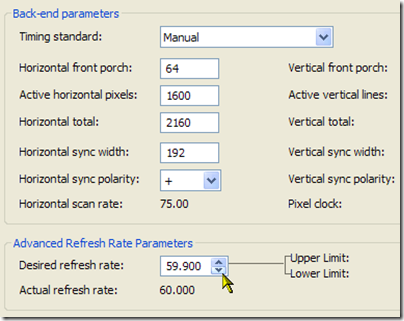 And I can now report, after more than 24 hours of running, that there have been no more screen blackouts. Hurrah! Hooray!