Recalcitrance indicates some degree of difficulty to control, unwillingness to obey requests or directions, uncertainty in behavior.

Alan Lepofsky in his LepoLand blog has quite a few good basic and advanced tips about using the Notes properties box. This search link should list most of his tips.

Now let me ask you a question. What’s the important distinction between the dispositions of the following two Lotus Notes properties boxes?

Did you work it out? Probably not, I suspect.

The image on the right shows what you get for Notes 8. Well, for Notes 8.5 at least, I can’t verify that this also happens for Notes 8.0 because I don’t have it installed any more. Three cheers, at last this usability glitch has been done away with. It’s about time, but better late than never, so thank you IBM! Now 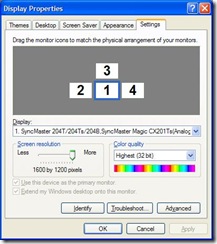 all you have to do is give us a resizable properties box.

These days I happen to use four 20-inch Samsung LCD monitors of 1600 x 1200 resolution arranged in an inverted T configuration (enjoying glorious high-resolution wallpapers, such as the panda, from Webshots).

Yes, I’ve spoiled myself, but that’s at least one benefit flowing from being self-employed.

When doing really intense application design work with Domino Designer, I find it incredibly efficient to have three or more designer panes open at once (for form design, view design, coding, etc) all laid out in their full individual glory on separate monitors. It’s really effective for side-by-side display of, say, two form or view designs, or two LotusScript subroutines.

I can also rotate any of the screens to portrait-mode position, such as when I spent almost two weeks carefully rewriting the NotesTracker Guide. 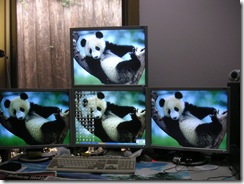 In the past -- especially when working at customer sites (where short-sighted stinginess tends to reign -- I’ve had to do the same complicated design tasks on a single pokey low-resolution monitor, slowing me down tremendously and thereby costing the client more (perhaps significantly more on lengthy projects).

Errant behavior like the above is far more commonplace than it should be. I find the native Windows XP/Vista support of multiple monitors to be excellent. You can position your two (or three, or four, or more) monitors in various positions relative to each other, and Windows handles it all with aplomb. When you rotate a monitor, Windows handles this flawlessly too. Splendid work by Microsoft!

Unfortunately there are quite a few applications out there in the wild that don’t correctly handle multiple monitors. Some refuse to work on any but the primary monitor. Others do bizarre things, such as always opening in a particular secondary monitor, or opening spread across all of the monitors as if they were a single huge monitor. This is just poor application design and/or coding. I’d hate to see such really unreliable work done for things like airplane control or nuclear power station operation. (Maybe it is, in small ways?)

Over nearly forty years in the industry, I’ve noticed that there aren’t all that many many employers willing to provide their IT staff with much more than basic hardware (or software, for that matter). More’s the pity, since these days items like good quality high-resolution LCD monitors and well-endowed desktop/notebook PCs are quite inexpensive and are IMHO essential productivity tools to give to power developers (and administrators).