Well folks, Microsoft officially launched Internet Explorer 7 (IE7) several weeks ago, and I have been watching for any change in visitor traffic that might be associated with this event. Here's a snapshot taken less than an hour ago: 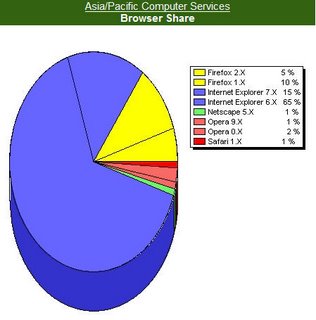 Only in the last few days have I detected a trend for IE7 to have increased enough to be able to say that Firefox might be losing out to IE7. Instead of ranging between 15-25% it seems to have dropped to around 10-15% and I guess that time will tell whether it's a temporary effect, while people experiment with IE7's new features.

But then, just two days later, Firefox resumed its 20-25% visitor share. I guess that I don't have enough visitors to my sites to smooth out the traffic pattern: 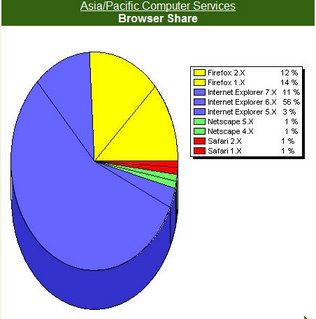 For comparison, here's the chart for asiapac.com.au Browser Share as at October 2006.

While I agree that IE7 has some important enhancements (after a long, long wait) such as better CSS standards adherence and major security features, I'm not at all a wildly enthusiastic IE7 fan and in particular dislike its limited configurability and its "dog's breakfast" of a user interface.

I earlier commented that Microsoft IE7 will be sub-standard and will probably have more to say on this in future. I've been using IE7 betas since early 2007, and installed the gold version as soon as it was released. While I was happy enough with IE6, I simply cannot tolerate the native IE7 user interface so clumsy and inflexible do I find it, and instead use the excellent Avant Browser shell as a far superior way to drive the underlying IE7 rendering engine. (I must stress that this is for me, the way that I work. The "great unwashed" mass of many millions of IE7 users will probably be quite happy with it. And I also use Firefox every day, for specific tasks that it handles better than IE7. And Opera occasionally too, just to keep in touch with its features. Plus, there are quite a few other IE shells out there, and I've probably tried most of them, with Maxthon and Enigma Browser for me coming in second behind Avant. I'm happy to swath between browsers to suit the task in hand, but I suppose that most Windows users will just use what version of IE is installed on their system.)

Also, I issued a warning to Web site content managers that Tabbed Browsing can be a Performance Crippler (When you have multiple tabs open on pages that have those annoying endlessly-looping dynamic advertisements that each use a little CPU processing power, but when you add up this effect across even as few as four or five concurrently open tabs it can really gobble up lots of CPU and noticeably slow down your system.) Now that IE7 is spreading out across the vast Windows user community, I think there will be lots of concern about this effect and negative vibes for content managers plus advertisers alike. My strong recommendation for both content managers and advertisers alike is to use only advertisements that loop once (with a button to initiate replay) and to banish forever those endlessly-looping horrors!
Posted by NotesTracker - Tony Austin at 11/27/2006 11:13:00 AM